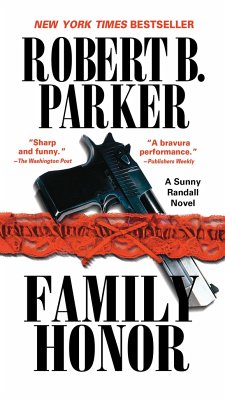 The author of the bestselling Spenser novels introduces a heroine unlike any other--private eye Sunny Randall. She's street-smart, sexy, and suddenly thrown into a Boston mob war where high-stakes politics and low-down killers conspire to make Sunny's first case her last. Optioned by actress Helen Hunt for a feature film in which she'll take the starring role.
A blazingly original novel from the undisputed dean of American crime fiction, featuring a sharp, tough, sexy new P.I., Sunny Randall.
Sunny Randall is a Boston P.I. and former cop, a college graduate, an aspiring painter, a…mehr

Sunny Randall is a Boston P.I. and former cop, a college graduate, an aspiring painter, a divorcée, and the owner of a miniature bull terrier named Rosie. Hired by a wealthy family to locate their teenage daughter, Sunny is tested by the parents preconceived notion of what a detective should be. With the help of underworld contacts she tracks down the runaway Millicent, who has turned to prostitution, rescues her from a vicious pimp, and finds herself, at thirty-four, the unlikely custodian of a difficult teenager when the girl refuses to return to her family.

But Millicent s problems are rooted in much larger crimes than running away, and Sunny, now playing the role of bodyguard, is caught in a shooting war with some very serious mobsters. She turns for help to her ex-husband, Richie, himself the son of a mob family, and to her dearest friend, Spike, a flamboyant and dangerous gay man. Heading this unlikely alliance, Sunny must solve at least one murder, resolve a criminal conspiracy that reaches to the top of state government, and bring Millicent back into functional young womanhood.