Soviet Robots in the Solar System 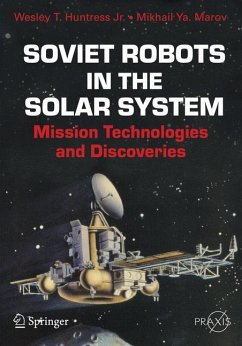 Soviet Robots in the Solar System

Soviet Robots in the Solar System provides a history of the Soviet robotic lunar and planetary exploration program from its inception, with the attempted launch of a lunar impactor on September 23, 1958, to the last launch in the Russian national scientific space program in the 20th Century, Mars 96, on November 16, 1996. This title makes a unique contribution to understanding the scientific and engineering accomplishments of the Soviet Union's robotic space exploration enterprise from its infancy to its demise with the collapse of the Soviet Union. The authors provide a comprehensive account…mehr

Andere Kunden interessierten sich auch für
Produktbeschreibung
Soviet Robots in the Solar System provides a history of the Soviet robotic lunar and planetary exploration program from its inception, with the attempted launch of a lunar impactor on September 23, 1958, to the last launch in the Russian national scientific space program in the 20th Century, Mars 96, on November 16, 1996. This title makes a unique contribution to understanding the scientific and engineering accomplishments of the Soviet Union's robotic space exploration enterprise from its infancy to its demise with the collapse of the Soviet Union. The authors provide a comprehensive account of Soviet robotic exploration of the Solar System for both popular space enthusiasts and professionals in the field. Technical details and science results are provided and put into an historical and political perspective in a single volume for the first time. The book is divided into two parts. Part I describes the key players and the key institutions that build and operate the hardware, the rockets that provide access to space, and the spacecraft that carry out the enterprise. Part II is about putting these pieces together to enable space flight and mission campaigns. Part II is written in chronological order beginning with the first launches to the Moon. Each chapter covers a particular period when specific mission campaigns were undertaken during celestially-determined launch windows. Each chapter begins with a short overview of the flight missions that occurred during the time period and the political and historical context for the flight mission campaigns, including what the Americans were doing at the time. The bulk of each chapter is devoted to the scientific and engineering details of that flight campaign. The spacecraft and payloads are examined with as much technical detail as is available today, the progress is described, and a synopsis of the scientific result is given.
Produktdetails
Autorenporträt
Dr. Wesley T. Huntress, Jr., is currently Director Emeritus at the Geophysical Laboratory of the Carnegie Institution of Washington. The author was the widely respected Director of NASA's Solar System Exploration Directorate from 1990 to 1992, and then Associate Administrator for Space Science from 1993 to 1998, where he was responsible for all of NASA's robotic science missions. During this time, and throughout his long and distinguished career, Dr. Huntress, Jr. has had a regular and sustained contact and interaction with the Russians. He has gained great appreciation of the Russian robotic exploration program of the Moon and the planets during the 20th century. Mikhail Marov is a long-time veteran of the Soviet scientific space program with experience on many past missions beginning the early 1970s and is currently at the Vernadsky Institute of Geochemistry in Moscow, one of the two principal scientific institutes involved in the Russian space program.  He is well known internationally and is one of the most recognizable Russian experts in space science and exploration around the world.
Inhaltsangabe
Illustrations.- Author's Preface.- Acknowledgments.- Part 1: The pieces: people, institutions, rockets and spacecraft.- Chapter 1: Space race.- Chapter 2: Key players.- Chapter 3: Key institutions.- Chapter 4: Rockets.- Chapter 5: Spacecraft.- Part II: Putting the pieces together: flying to the Moon, Venus, and Mars.- Chapter 6: Breaking free of Earth.- Chapter 7: Launching to Mars and Venus.- Chapter 8: New spacecraft, new failures.- Chapter 9: Three more years of frustration.- Chapter 10: Finally success at the Moon and Venus, but Mars eludes.- Chapter 11: Robotic achievements in the shadow of Apollo.- Chapter 12: Landing on the Moon, Venus, and Mars.- Chapter 13: Closeouts on a Venus spacecraft, a Moon rocket, and desperation at Mars.- Chapter14: Turning from the Moon and Mars to Venus.- Chapter 15: Repeating success at Venus.- Chapter 16: Back to Venus again.- Chapter 17: And back to Venus yet again.- Chapter 18: The International Comet Halley campaign.- Chapter 19: Another try at Mars and its moon Phobos.- Chapter 20: The last gasp: Mars-96.- Chapter 21: The Soviet lunar and planetary exploration legacy.- Appendices.- Bibliography.- Index.
Rezensionen
From the reviews:

"Anyone interested in planetary exploration should read the new book by Wesley T. Huntress, Jr. and Mikhail Ya. Marov, titled Soviet Robots in the Solar System. In addition to serving as a valuable catalog of all Soviet lunar and planetary missions, it is a remarkable description of a remarkable story. ... It methodically describes people, spacecraft, missions, and scientific results ... . It is a valuable reference for anyone in the space program." (Lou Friedman, The Space Review, September, 2011)

"The book covers all the major campaigns from the first lunar launch, a failed mission to impact the Moon's surface in 1958, to the last deep space mission to Mars in 1996. ... a treasure trove of information for anyone interested in space exploration and a fascinating account of the rivalry between East and West to be the first in its implementation. ... provides a wealth of detail on the scientific, engineering and technical aspects of the missions, as well as summary of their achievements." (Best Astronomy Books Newsletter, November/December, 2011)

"The book spans the period between the first Soviet lunar attempt in 1958 and their last deep space mission to Mars in 1996, focusing solely on those missions targeting the moon and planets and purposefully excludes Solar and Earth-Moon environment exploration. ... There is a huge amount of information here which is probably all in one place for the very first time. Apart from the scientific detail the historical side of the book is a revelation and is well worth reading for that reason alone." (Best Astronomy Books, October, 2011)

"This book details the Soviet Union's robotic space programme from the first lunar launch in 1958 to the Mars 96 mission. ... this provides a solid background for a detailed account of lunar and planetary missions. Many rare photographs and diagrams are included. ... The extensive research, knowledge and hard work of the authors has produced an outstanding book that should be considered a standard reference. ... With an extensive bibliography, appendices and index this is an essential purchase for spacecraft enthusiasts." (Robin Flegg, Astronomy Now, December, 2011)

"Serves as an excellent catalog of the Soviet Union's lunar and planetary exploration program. In sum, it is a useful description of a remarkable story that captures considerable data in one place and offers unique photographs of Soviet hardware. ... No question, this is the best overview of the Soviet planetary program published in the West. ... useful as a source for understanding this significant aspect of space age rivalries between the United States and the Soviet Union. ... it is a useful reference work." (Roger D. Launius, Quest: The History of Spaceflight, Vol. 19 (1), 2012)

"Huntress (Carnegie Institution of Washington) and Marov (Russian Academy of Sciences) present a detailed survey of the Soviet missions to the moon, Mars, and Venus. ... The descriptions of the rockets and the engineering details of the design and operation of the payloads are very good. The book is well illustrated, and the scientific and technical explanations are clear. A well-documented, useful work that will appeal to students of space history and space technology. Summing Up: Recommended. Upper-division undergraduates through professionals." (A. M. Strauss, Choice, Vol. 49 (5), January, 2012)
…mehr
Kundenbewertungen
Schreiben Sie eine Kundenbewertung zu diesem Produkt und gewinnen Sie mit etwas Glück einen 15,- EUR bücher.de–Gutschein!
Bewertung schreiben Bewertung schreiben
Mehr zum Thema