An Encyclopedic Survey of Archaeoastronomy 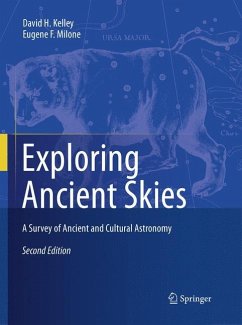 An Encyclopedic Survey of Archaeoastronomy

Exploring Ancient Skies brings together the methods of archaeology and the insights of modern astronomy to explore the science of astronomy as it was practiced in various cultures prior to the invention of the telescope. The book reviews an enormous and growing body of literature on the cultures of the ancient Mediterranean, the Far East, and the New World (particularly Mesoamerica), putting the ancient astronomical materials into their archaeological and cultural contexts. The authors begin with an overview of the field and proceed to essential aspects of naked-eye astronomy, followed by an…mehr