A First Course in Abstract Mathematics 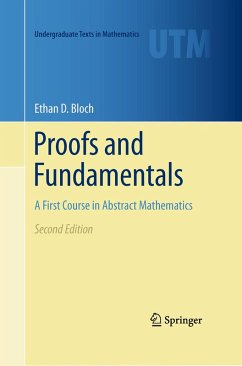 A First Course in Abstract Mathematics

"Proofs and Fundamentals: A First Course in Abstract Mathematics" 2nd edition is designed as a "transition" course to introduce undergraduates to the writing of rigorous mathematical proofs, and to such fundamental mathematical ideas as sets, functions, relations, and cardinality. The text serves as a bridge between computational courses such as calculus, and more theoretical, proofs-oriented courses such as linear algebra, abstract algebra and real analysis. This 3-part work carefully balances Proofs, Fundamentals, and Extras. Part 1 presents logic and basic proof techniques; Part 2…mehr

Andere Kunden interessierten sich auch für
Produktbeschreibung
"Proofs and Fundamentals: A First Course in Abstract Mathematics" 2nd edition is designed as a "transition" course to introduce undergraduates to the writing of rigorous mathematical proofs, and to such fundamental mathematical ideas as sets, functions, relations, and cardinality. The text serves as a bridge between computational courses such as calculus, and more theoretical, proofs-oriented courses such as linear algebra, abstract algebra and real analysis. This 3-part work carefully balances Proofs, Fundamentals, and Extras. Part 1 presents logic and basic proof techniques; Part 2 thoroughly covers fundamental material such as sets, functions and relations; and Part 3 introduces a variety of extra topics such as groups, combinatorics and sequences. A gentle, friendly style is used, in which motivation and informal discussion play a key role, and yet high standards in rigor and in writing are never compromised. New to the second edition: 1) A new section about the foundations of set theory has been added at the end of the chapter about sets. This section includes a very informal discussion of the Zermelo- Fraenkel Axioms for set theory. We do not make use of these axioms subsequently in the text, but it is valuable for any mathematician to be aware that an axiomatic basis for set theory exists. Also included in this new section is a slightly expanded discussion of the Axiom of Choice, and new discussion of Zorn's Lemma, which is used later in the text. 2) The chapter about the cardinality of sets has been rearranged and expanded. There is a new section at the start of the chapter that summarizes various properties of the set of natural numbers; these properties play important roles subsequently in the chapter. The sections on induction and recursion have been slightly expanded, and have been relocated to an earlier place in the chapter (following the new section), both because they are more concrete than the material found in the other sections of the chapter, and because ideas from the sections on induction and recursion are used in the other sections. Next comes the section on the cardinality of sets (which was originally the first section of the chapter); this section gained proofs of the Schroeder-Bernstein theorem and the Trichotomy Law for Sets, and lost most of the material about finite and countable sets, which has now been moved to a new section devoted to those two types of sets. The chapter concludes with the section on the cardinality of the number systems. 3) The chapter on the construction of the natural numbers, integers and rational numbers from the Peano Postulates was removed entirely. That material was originally included to provide the needed background about the number systems, particularly for the discussion of the cardinality of sets, but it was always somewhat out of place given the level and scope of this text. The background material about the natural numbers needed for the cardinality of sets has now been summarized in a new section at the start of that chapter, making the chapter both self-contained and more accessible than it previously was. 4) The section on families of sets has been thoroughly revised, with the focus being on families of sets in general, not necessarily thought of as indexed. 5) A new section about the convergence of sequences has been added to the chapter on selected topics. This new section, which treats a topic from real analysis, adds some diversity to the chapter, which had hitherto contained selected topics of only an algebraic or combinatorial nature. 6) A new section called ``You Are the Professor'' has been added to the end of the last chapter. This new section, which includes a number of attempted proofs taken from actual homework exercises submitted by students, offers the reader the opportunity to solidify her facility for writing proofs by critiquing these submissions as if she were the instructor for the course. 7) All known errors have been corrected. 8) Many minor adjustments of wording have been made throughout the text, with the hope of improving the exposition.

Produktdetails
Autorenporträt
Dr. Ethan D. Bloch of Bard College is the author of two Springer publications "A First Course in Geometric Topology and Differential Geometry," and the first and second editions of, "Proofs and Fundamentals: A First Course in Abstract Mathematics." More information about Dr. Ethan D. Bloch can be found on his person web page: http://math.bard.edu/bloch
Inhaltsangabe
Preface to the Second Edition Preface to the First Edition To the Student To the Instructor Part I. Proofs 1. Informal Logic 2. Strategies for Proofs Part II. Fundamentals 3. Sets 4. Functions 5. Relations 6. Finite and Infinite Sets Part III. Extras 7. Selected Topics 8. Explorations Appendix: Properties of Numbers Bibliography Index
Rezensionen
"This is a well-written book, based on very sound pedagogical ideas. It would be an excellent choice as a textbook for a 'transition' course." (Margret Höft, zbMATH 1012.00013, 2021)

"The contents of the book is organized in three parts ... . this is a nice book, which also this reviewer has used with profit in his teaching of beginner students. It is written in a highly pedagogical style and based upon valuable didactical ideas." (R. Steinbauer, Monatshefte für Mathematik, Vol. 174, 2014)

"Books in this category are meant to teach mathematical topics and techniques that will become valuable in more advanced courses. This book meets these criteria. ... This book is well suited as a textbook for a transitional course between calculus and more theoretical courses. I also recommend it for academic libraries." (Edgar R. Chavez, ACM Computing Reviews, February, 2012)

"This is an improved edition of a good book that can serve in the undergraduate curriculum as a bridge between computationally oriented courses like calculus and more abstract courses like algebra." (Teun Koetsier, Zentralblatt MATH, Vol. 1230, 2012)