Saudi Arabia, Iran, and the Forty-Year Rivalry That Unraveled Culture, Religion, and Collective Memory in the Middle East 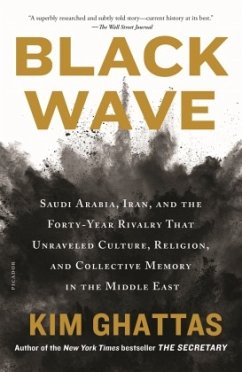 Saudi Arabia, Iran, and the Forty-Year Rivalry That Unraveled Culture, Religion, and Collective Memory in the Middle East

A New York Times Notable Book of 2020
"[A] sweeping and authoritative history" ( The New York Times Book Review ), Black Wave is an unprecedented and ambitious examination of how the modern Middle East unraveled and why it started with the pivotal year of 1979.
Kim Ghattas seamlessly weaves together history, geopolitics, and culture to deliver a gripping read of the largely unexplored story of the rivalry between between Saudi Arabia and Iran, born from the sparks of the 1979 Iranian revolution and fueled by American policy.
With vivid story-telling, extensive historical research and…mehr

"[A] sweeping and authoritative history" (The New York Times Book Review), Black Wave is an unprecedented and ambitious examination of how the modern Middle East unraveled and why it started with the pivotal year of 1979.

Kim Ghattas seamlessly weaves together history, geopolitics, and culture to deliver a gripping read of the largely unexplored story of the rivalry between between Saudi Arabia and Iran, born from the sparks of the 1979 Iranian revolution and fueled by American policy.

With vivid story-telling, extensive historical research and on-the-ground reporting, Ghattas dispels accepted truths about a region she calls home. She explores how Sunni Saudi Arabia and Shia Iran, once allies and twin pillars of US strategy in the region, became mortal enemies after 1979. She shows how they used and distorted religion in a competition that went well beyond geopolitics. Feeding intolerance, suppressing cultural expression, and encouraging sectarian violence from Egypt to Pakistan, the war for cultural supremacy led to Iran's fatwa against author Salman Rushdie, the assassination of countless intellectuals, the birth of groups like Hezbollah in Lebanon, the September 11th terrorist attacks, and the rise of ISIS.

Ghattas introduces us to a riveting cast of characters whose lives were upended by the geopolitical drama over four decades: from the Pakistani television anchor who defied her country's dictator, to the Egyptian novelist thrown in jail for indecent writings all the way to the murder of journalist Jamal Khashoggi in the Saudi consulate in Istanbul in 2018. Black Wave is both an intimate and sweeping history of the region and will significantly alter perceptions of the Middle East.


Produktdetails
Autorenporträt
Ghattas, Kim§Kim Ghattas is an Emmy-award winning journalist and writer who covered the Middle East for twenty years for the BBC and the Financial Times. She has also reported on the U.S State Department and American politics. She has been published in The Atlantic, the Washington Post, and Foreign Policy and is currently a non-resident scholar at the Carnegie Endowment for International Peace in Washington. Her first book, The Secretary, was a New York Times bestseller. Born and raised in Lebanon, she now lives between Beirut and Washington D.C.
Inhaltsangabe
Note on Names and Spellings
People
Map
Introduction
Part I Revolution
1.Cassette Revolution
2.Today Tehran, Tomorrow Jerusalem
3.Bleeding Heart
4.Darkness
Part II Competition
5.I Killed the Pharaoh
6.No Dupatta
7.Karbala in Beirut
8.Shia Kafir
9.Mecca Is Mine
10.Culture Wars
11.Black Wave
12.Generation 1979
Part III Revenge
13.Cain and Abel
14.Fracture
15.Surrender
16.Counterrevolution
17.Between ISIS and IRGC
18.Achilles' Heel
19.Murder on the Bosporus
Conclusion
Notes
Acknowledgments
Index
Rezensionen
Shortlisted for the Cundill History Prize * A New York Times Notable Book of 2020 * A Kirkus Reviews Best Nonfiction Book of 2020 * A Financial Times Best Political Book of 2020