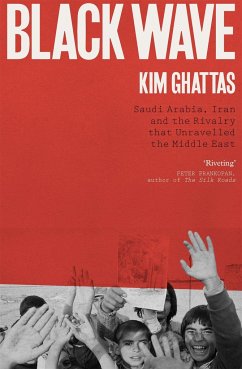 'Blistering' Sunday Times 'Indispensable' Observer 'Fascinating' The Times 'Brilliant' Peter Frankopan 'Revelatory' Lindsey Hilsum A timely and unprecedented examination of how the modern Middle East unravelled, and why it started with the pivotal year of 1979 'What happened to us?' For decades, the question has haunted the Arab and Muslim world, heard across Iran and Syria, Saudi Arabia and Pakistan, and in the author's home country of Lebanon. Was it always so? When did the extremism, intolerance and bloodletting of today displace the region's cultural promise and diversity? In Black Wave,…mehr

Andere Kunden interessierten sich auch für
Produktbeschreibung
'Blistering' Sunday Times 'Indispensable' Observer 'Fascinating' The Times 'Brilliant' Peter Frankopan 'Revelatory' Lindsey Hilsum A timely and unprecedented examination of how the modern Middle East unravelled, and why it started with the pivotal year of 1979 'What happened to us?' For decades, the question has haunted the Arab and Muslim world, heard across Iran and Syria, Saudi Arabia and Pakistan, and in the author's home country of Lebanon. Was it always so? When did the extremism, intolerance and bloodletting of today displace the region's cultural promise and diversity? In Black Wave, award-winning journalist and author Kim Ghattas argues that the turning point in the modern history of the Middle East can be located in the toxic confluence of three major events in 1979: the Iranian revolution; the siege of the Holy Mosque in Mecca; and the Soviet invasion of Afghanistan. Before this year, Saudi Arabia and Iran had been working allies and twin pillars of US strategy in the region - but the radical legacy of these events made them mortal enemies, unleashing a process that transformed culture, society, religion and geopolitics across the region for decades to come. Drawing on a sweeping cast of characters across seven countries over forty years, Ghattas demonstrates how this rivalry for religious and cultural supremacy has fed intolerance, suppressed cultural expression, encouraged sectarian violence, birthed groups like Hezbollah and ISIS and, ultimately, upended the lives of millions. At once bold and intimate, Black Wave is a remarkable and engrossing story of the Middle East as it has never been told before.
Produktdetails
Autorenporträt
Kim Ghattas is an Emmy-award winning journalist and writer who covered the Middle East for twenty years for the BBC and the Financial Times. She has also reported on the U.S State Department and American politics. She has been published in the Atlantic, the Washington Post and Foreign Policy, and is currently a non-resident scholar at the Carnegie Endowment for International Peace in Washington. Born and raised in Lebanon, she now lives between Beirut and Washington D.C.
Inhaltsangabe
Note on Names and Spellings
People
Map
Introduction
Part I Revolution
1.Cassette Revolution
2.Today Tehran, Tomorrow Jerusalem
3.Bleeding Heart
4.Darkness
Part II Competition
5.I Killed the Pharaoh
6.No Dupatta
7.Karbala in Beirut
8.Shia Kafir
9.Mecca Is Mine
10.Culture Wars
11.Black Wave
12.Generation 1979
Part III Revenge
13.Cain and Abel
14.Fracture
15.Surrender
16.Counterrevolution
17.Between ISIS and IRGC
18.Achilles' Heel
19.Murder on the Bosporus
Conclusion
Notes
Acknowledgments
Index
Rezensionen
Shortlisted for the Cundill History Prize * A New York Times Notable Book of 2020 * A Kirkus Reviews Best Nonfiction Book of 2020 * A Financial Times Best Political Book of 2020