From Conflict to Shared Management 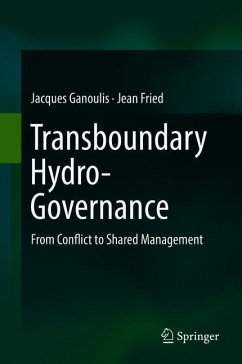 From Conflict to Shared Management

Attending water security is an important challenge and a major systemic risk humanity faces in the years to come. This is due to population increase, over-consumption of water, especially in agriculture, climate change and various forms of water pollution. The issue becomes more complicated in transboundary water catchments that cover almost half of the world's land surface, with about 60% of global river flow and 40% of the world's population. Also, in many parts of the planet, like Saharan Africa, population depends on groundwater resources located in transboundary aquifer systems. These…mehr

Andere Kunden interessierten sich auch für
Produktbeschreibung
Attending water security is an important challenge and a major systemic risk humanity faces in the years to come. This is due to population increase, over-consumption of water, especially in agriculture, climate change and various forms of water pollution. The issue becomes more complicated in transboundary water catchments that cover almost half of the world's land surface, with about 60% of global river flow and 40% of the world's population. Also, in many parts of the planet, like Saharan Africa, population depends on groundwater resources located in transboundary aquifer systems. These facts illustrate the importance of the book's subject, which is the governance of transboundary waters, both surface and groundwater. The book is written by two distinguished scientists, who, having worked in various international institutions, like UNESCO, GEF, UNEP and at the European Commission, have both an extended expertise on how to bridge the gap between science and political decision-making, which is the main factor for an effective governance of water resources. What is new in the book is the integrated analysis of transboundary governance of both surface water and groundwater, as it occurs in reality. In current literature, groundwater is still often missing for the benefit of surface water or, on the contrary, it is treated separately from surface water. The most important feature of the book is to distinguish between the real and a "good" or an effective transboundary water governance and to provide practical tools, methodologies and examples for its implementation in the field. Published timely during 2018, the book will contribute to address successfully practical problems of governance of transboundary waters that represent a very important part of our precious fresh water resources.
Produktdetails
Autorenporträt
Jacques Ganoulis is Emeritus Professor of Civil Engineering at the Aristotle University of Thessaloniki (Greece), Ph.D. (Doctorat d'Etat) in Natural Sciences from the University of Toulouse (France) and visiting scholar at the Universities of Erlangen (Germany), McGill (Canada), Melbourne (Australia) and Paris VI (France). He has more than 35 years' experience in IWRM (Integrated Water Resources Management), risk analysis, climate change and transboundary water management, including transboundary aquifer resources and conflict resolution. He is currently the State Secretary for Water at the Ministry of Environment and Energy in Athens, Greece, the Director of the UNESCO Chair/International Network of Water-Environment Centres for the Balkans (INWEB), UNESCO's Senior Consultant and Greece representative in UNESCO's International Hydrological Programme (IHP), Paris. He has published more than 200 papers in International Journals and Conferences and he is the co-editor/author of 10 books including "Transboundary Water Resources Management: a Multidisciplinary Approach" (WILEY, 2011), "Risk Analysis of Water Pollution" (WILEY, 2009; 2nd edition; translated into Chinese) and "Transboundary Groundwater Resources: Sustainable Management and Conflict Resolution" (Lambert Academic Publishing, 2016).

Inhaltsangabe
PART 1: MAIN ASPECTS OF TRANSBOUNDARY WATERS Chapter 1: Hydrology of internationally shared rivers and lakes Summary: By definition, transboundary watersheds are river and lake hydrological basins divided by political borders. Although the physical characteristics of internationally shared hydrological catchments are independent from the socio-economic conditions of each riparian country, their scientific description may differ from one country to another. This is because countries develop their own monitoring systems for collecting data and information, apply different scientific approaches due to historical and national socio-economic conditions and may have different scientific interpretations of hydrological processes from national expert groups. Before analysing the governance of transboundary surface watersheds both at national and multi-national level, this chapter explains how a unified approach to transboundary surface waters governance may be obtained. The best approach is to enhance discussions between different groups of scientists working in riparian countries, to proceed with harmonisation of national monitoring systems and to obtain a common interpretation of the data collected and hydrological processes at national level. After describing the typology of transboundary hydrological systems, in this chapter, useful recommendations are formulated on how to deal with different national monitoring data and hydrological models. Chapter 2: Hydrogeological characteristics of transboundary aquifers Summary: Fresh groundwater resources are stored in aquifer systems and constitute a very precious source of water for human use. UNESCO reports that groundwater supplies nearly half of all drinking water in the world and worldwide, 2.5 billion people depend solely on groundwater for their daily needs. More than 400 major aquifers are shared between two or more countries and the aim of this chapter is to provide basic understanding of their hydrogeological characteristics. The typology of shared aquifers is reported firstly in terms of the location in space of national borders and different geological aquifer characteristics, such as porous, karst and crystalline formations. Relations between the boundaries of surface water basins and hydrogeological basins are also described. Then, the main steps for assessing and mapping transboundary aquifers are analysed. These are: aquifer delineation, hydrogeological description, classification, transboundary diagnostic analysis, and zoning. The need of sharing data and information between riparian countries and establishing a common view of the hydrogeological situation of shared aquifers is again a very important step in order to proceed with an effective governance of groundwater resources. Chapter 3: Potential water conflicts and cooperation across political borders Summary: Water is a key factor for socio-economic development of human societies as it is the main element for human and ecosystems survival, and play a major role in different economic activities, such as agricultural irrigation, energy, industrial production and environmental preservation. Various natural and man-made factors, such as physical or economic water scarcity, are sources of potential water conflicts between neighboring countries sharing common surface and groundwater resources. In this chapter, different types of conflicts are analysed as related to water quantity, water quality and water ecosystem problems. International water disputes and conflicts may be related to different socio-economic and political factors and in some extreme cases may lead to armed confrontation between countries. The main issue in this chapter is the investigation of different conflict prevention strategies and the ways to reverse potential conflicts to cooperation, also mentioning the paradoxical existence of cooperative situations without a political agreement. Well known examples of potential transboundary wate
Kundenbewertungen
Schreiben Sie eine Kundenbewertung zu diesem Produkt und gewinnen Sie mit etwas Glück einen 15,- EUR bücher.de–Gutschein!
Bewertung schreiben Bewertung schreiben
Mehr zum Thema