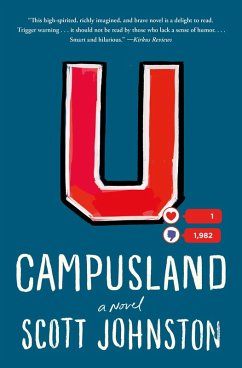 "This high-spirited, richly imagined, and brave novel is a delight to read... Smart and hilarious."
- Kirkus Reviews
Joyous, fast and funny, Scott Johnston's Campusland is a satiric howl at today's elite educational institutions-from safe spaces to tribal infighting to the sheer sanctimony. A wickedly delightful novel that may remind you of Tom Wolfe and David Lodge.
Her room sucks. Her closet isn't big enough for two weeks'-worth of outfits, much less her new Rag & Bone for fall. And there's nothing worth posting. Cruel. To Lulu Harris-It Girl-in-the-Making-her first year at the…mehr

Joyous, fast and funny, Scott Johnston's Campusland is a satiric howl at today's elite educational institutions-from safe spaces to tribal infighting to the sheer sanctimony. A wickedly delightful novel that may remind you of Tom Wolfe and David Lodge.

Her room sucks. Her closet isn't big enough for two weeks'-worth of outfits, much less her new Rag & Bone for fall. And there's nothing worth posting. Cruel. To Lulu Harris-It Girl-in-the-Making-her first year at the ultra-competitive Ivy-like Devon University is a dreary impediment. If she's fabulous and no one sees it, what's the point?

To Eph Russell, who looks and sounds like an avatar of privilege (shh!-he's anything but) Devon is heaven. All day to think and read and linger over a Welsh rarebit at The Faculty Club, not to mention teach English 240 where he gets to discuss all his 19th Century favorites, like Mark Twain. If Eph could just get tenure, he could stay forever, but there are landmines everywhere.

In his seventh year at Devon, Red Wheeler is the alpha dog on top of Devon's progressive hierarchy, the most woke guy on campus. But when his position is challenged, Red is forced to take measures.

Before first term is halfway finished, Lulu bungles her social cache with her clubbable upperclass peers, and is forced to reinvent herself. Shedding her designer clothes, she puts on flannel and a brand-new persona: campus victim. For Lulu to claw her way back to the top, she'll build a pyre and roast anyone in her way.

All paths converge as privileged, marginalized, and radical students form identity alliances, sacrifice education for outrage, and push varied agendas of political correctness that drags every free thought of higher learning into the lower depths of an entitled underclass.

Campusland is a riotous, subversive and fresh read.

Scott Johnston’s debut novel surely will not remain without any effect on the reader, in fact, it provokes strong emotions ranging from aversion to frustration, from laughing out loud to total desperation. It is hilarious at times and oftentimes simply infuriates you, most of all because you can imagine all the plot to be totally true. It is a chain of events set in motion, not even intentionally, but unstoppable and the way the characters react to it is more than authentic.

There are many noteworthy and controversial aspects in this highly entertaining novel. First of all, the debate of “trigger warnings” in university that has been going on for some time. Wrapping students up in cotton wool in order not to confront them with reality has been an attitude that I always struggled with. Especially when it comes to literature which reflects the time of its origin, this is hard to understand. Therefore, the beginning of the novel when Eph Russell is accused of only reading white men – who else was there to be published in this period? – this is merely funny and can be dismissed as stupid somehow. The next step is the discussion of which gender somebody identifies himself/herself – or as in the novel: themselves. It goes without saying that LGBTI rights are a great achievement and that minorities should be respected in the same way as majorities. Yet, accusing somebody of misogyny because he is holding the door open definitely ridicules the earnest cause – unfortunately, this is all too real in a strange understanding of feminism and the like and something one sees quite often.

The most striking point is surely Russell’s accusation of sexual assault. Without any doubt, the way the female characters in the novel act is not only convincing, but seems totally authentic. Putting unrelated aspects in a certain context, interpreting them along one single line of interpretation and thus narrating a coherent story that fits well in the world view one has – this can destroy a perfectly innocent life. When you read what happens to the professor, you cannot believe it, yet, you see how the mechanisms work and how Russell cannot do anything about it.

I am sure some reader might find “Campusland” offensive, yet, in my opinion, the way the author satirizes and exaggerates is necessary to put straight some positions that somehow went a bit too far or have taken questionable developments. For me, it was a fantastic read and I would surely say that this is one of the most relevant literary contributions to a lot of current discussions – and, on top, it is wonderfully narrated.
Bezieht sich auf folgende Ausgabe: Gebundenes Buch
War diese Bewertung für Sie hilfreich?
JaNein
Hilfreicher Kommentar