On Superconductivity and Superfluidity 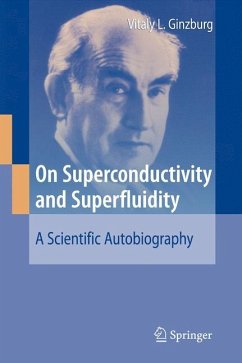 On Superconductivity and Superfluidity

A Nobel Laureate presents his view of developments in the field of superconductivity, superfluidity and related theory. The book contains Ginzburg's amended version of the Nobel lecture in Physics 2003, as well as his expanded autobiography.
The English version of the book does not di?er essentially from the Rus- 1 sian version . Along with a few notes and new references I included Part II to Article 3 and added some new materials to the Nobel autobiography. Furthermore, Article 7 (M. Cardona and W. Marx Vitaly L. Ginzburg a bibliometricstudy…mehr

"Ginzburg's final book, On Superconductivity and Superfluidity: A Scientific Autobiography, contains his 2003 Physics Nobel Prize lecture, his views on contemporary scientific and political issues, and his contributions to physics, particularly to his two favorite fields, mentioned in the book's title. ... The general public will find Ginzburg's personal views interesting ... . the book is intended for people with a physical-science or mathematical education." (Valery Pokrovsky, Physics Today, January, 2010)

"The volume under review presents Vitaly Ginzburg's personal impressions on the development in the field of superconductivity. The present book contains a selection of Ginzburg's key writings, including his amended version of the Nobel lecture in Physics 2003. ... The book is intended for people with a physical-science or mathematical education and the readers will find Vitaly Ginzburg's personal views as very interesting." (Vicentiu D. Radulescu, Zentralblatt MATH, Vol. 1205, 2011)