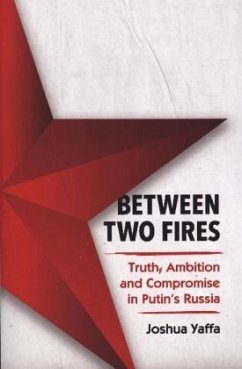 From The New Yorkers correspondent in Moscow, Between Two Fireschronicles the lives of eight ambitious Russians - from politicians and entrepreneurs to artists and historians - who have built their careers and constructed their identities in the shadow of the Putin system, where astonishingly, Putin's approval rating remains at 80%.…mehr

Andere Kunden interessierten sich auch für
Produktbeschreibung
From The New Yorkers correspondent in Moscow, Between Two Fireschronicles the lives of eight ambitious Russians - from politicians and entrepreneurs to artists and historians - who have built their careers and constructed their identities in the shadow of the Putin system, where astonishingly, Putin's approval rating remains at 80%.
Produktdetails
Autorenporträt
Joshua Yaffa is a correspondent for The New Yorker in Moscow, where he has lived for the last eight years. He has been a fellow at the New America foundation, a finalist for the Livingston Award, a visiting scholar at the Harriman Institute at Columbia University, and a grantee of the Pulitzer Center for Crisis Reporting.
Rezensionen
A deeply reported account of what it's like to live in Putin's Russia, but it's not about Twitter bots or influencing foreign elections or even Vladimir Putin himself. . . . Yaffa gives us insight into Putin by helping us better understand the political culture that produced him. NPR

Superb . . . [An] excellent new book. . . . Yaffa has distinguished himself with his rigor, his acumen, and his nuanced voice. . . . His in-depth reporting consistently allows him to move beyond the headlines, revealing the deeper historical and sociological patterns that underpin that notoriously contradictory country. Foreign Affairs

Yaffa skilfully weaves together perceptive descriptions of flesh-and-blood people with a balanced evocation of the wider political and historical context. As we follow these individuals, we come to understand many of the developments of the post-Soviet era . . . through the eyes of those who have lived through them. Yaffa has a good eye for colourful detail . . . and he proves attentive to the subtleties and ambiguities of Russian life. Tony Wood, Financial Times

A fascinating and nuanced account that illuminates the myriad conflicting and often contradictory forces that have shaped the Russia of today. Douglas Smith, The Wall Street Journal

[A] highly original and riveting account . . . Good and not-so-good men and women are forced to make difficult choices and Joshua Yaffa s remarkable book is a guide to the pain and pleasure of their lives in the public arena. Robert Service, Foreign Policy

Deeply reported and detailed . . . A fascinating exploration into the beliefs and psyches of Russians in many different career fields who reveal their souls to Yaffa, often to a surprising degree but with little apparent fear of reprisal. San Francisco Chronicle

Between Two Fires stands a rank above most publications of its genre because of its effective shoe-leather reporting. Not content with analyzing media coverage or online debates, Yaffa has sought out and interviewed both his central characters and their friends, enemies, and former supporters. Greg Afinogenov, Bookforum

Between Two Fires is a study of compromise, opportunism, and the fraught moral choices available in Putin s Russia. In a series of carefully reported stories, Joshua Yaffa shows how people choose sometimes consciously and other times not to adapt, change, and otherwise make do in an authoritarian state. Anne Applebaum, author of Red Famine and Gulag

In Between Two Fires, Joshua Yaffa brilliantly captures the complex choices and compromises that Russians make to survive, thrive, or remain true to their principles in Putin s Russia. Michael McFaul, former U.S. ambassador to Russia and author of From Cold War to Hot Peace