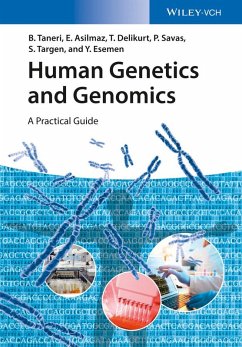 Produktdetails
Autorenporträt
Bahar Taneri is a Professor of Molecular Biology and Genetics at Eastern Mediterranean University (EMU), Famagusta, Cyprus. After obtaining her Ph.D. degree in Biomedical Sciences, from The Rockefeller University, New York, USA in 2005, she has taught several Genetics and Genomics modules at EMU, where she has founded the Molecular Biology and Genetics undergraduate program. At EMU, she has served as the editor-in-chief of the University Research Newsletter for two years. She has also been chairing the Department of Biological Sciences since 2013. She is an affiliated Researcher of Institute for Public Health Genomics, Department of Genetics and Cell Biology, Faculty of Health, Medicine & Life Sciences at Maastricht University, Netherlands since 2011. She authored several publications in the field of genome biology and personalized medicine; and received several awards including a Fulbright Scholarship. Currently, her main research interests include human genomics, epigenomics and efficient translation of personalized genome-based findings into healthcare and medicine for prediction and prevention of common complex diseases. She is a founding member of the Medical Biotechnology Master's program at EMU, where she teaches modules including Genome Editing. Esra Asilmaz is currently a Locum Consultant in Gastroenterology and General Internal Medicine at Homerton University Hospital in London, UK. She obtained her Ph.D. degree in Molecular Genetics from The Rockefeller University, NYC, USA in 2004. She subsequently obtained her Bachelor of Medicine, Bachelor of Surgery degree in 2009 from St. George's University of London, UK. Between 2009-2011, she completed an Academic Foundation Programme at St. Thomas' and Guy's Hospital, London, UK. During this time, she worked at Professor Trembath's Laboratory of Human Genetics and was involved in the identification of Notch2 mutations in Hadju-Cheney Syndrome, a rare genetic condition. She was an Academic Clinical Fellow at University College Hospital, London, UK between 2011-2014 and was a member of Dr. Oben's laboratory at The Institute of Liver and Digestive Health. She obtained her MRCP (UK) Diploma in 2014 and Specialist Examination in Gastroenterology in 2016. She obtained her CCT in Gastroenterology and General Internal Medicine in September 2019. Turem Delikurt is a registered genetic counsellor. She graduated with a BSc in Biology from the University of South Dakota, USA in 2003. She completed her MSc in Genetic Counselling with a merit from the University of Manchester, UK in 2006. She has been working as a genetic counsellor in Cyprus since 2006. In 2015, she was registered by the European Board of Medical Genetics. Her main research interest is the exploration of genetic counselling in the context of culture. She is currently pursuing her Ph.D. degree, which is sponsored through the University of Plymouth, UK titled "Genetic Counselling in the Turkish Cypriot community". She is dedicated to increasing awareness about genetic conditions and genetic counselling, within her community. She penned a weekly column titled "Genetics Today" at one of the main newspapers in North Cyprus from 20004 until 2017. Over the years, she has been continuosly involved in various civil society activities aimed at increasing the quality of care and life of patients and families at risk of or affected by genetic conditions in Cyprus. Pembe Savas obtained her undergraduate degree in Medical Biochemistry from University of Leicester, UK in 2011 and further received an MSc degree in Reproductive Science and Women?s Health at University College London, UK in 2012. She has completed her project on pre-implantation genetic diagnosis of beta-thalassaemia at Cyprus Institute of Neurology and Genetics, Nicosia, Cyprus, in 2012, where she gained hands-on laboratory experience. Since 2013, Pembe Savas is working as a senior instructor at the Department of Biological Sciences, Eastern Mediterranean Un
Inhaltsangabe
PrefaceSummary of ChaptersExperiment 1: Exploring Online Genetic SourcesExperiment 2: Observation of Human InheritanceExperiment 3: Reading, Understanding and Constructing Human PedigreesExperiment 4: CytogeneticsExperiment 5: Exploring DNA, RNA, Protein Sequence Databases and Genome BrowsersExperiment 6: Exploring Online Bioinformatics ToolsExperiment 7: Multifactorial Inheritance and Common Complex DiseasesExperiment 8: Neurogenetics and Behavioral GeneticsExperiment 9: Cancer GeneticsExperiment 10: Genetic CounselingExperiment 11: Evolving Tools in Genome Editing: CRISPR-CAS
Kundenbewertungen
Schreiben Sie eine Kundenbewertung zu diesem Produkt und gewinnen Sie mit etwas Glück einen 15,- EUR bücher.de–Gutschein!
Bewertung schreiben Bewertung schreiben
Mehr zum Thema