The Resiliency of "We the People of the United States" in Challenging Times (eBook, ePUB) 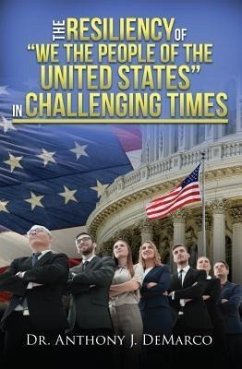 The Resiliency of "We the People of the United States" in Challenging Times (eBook, ePUB)

Andere Kunden interessierten sich auch für
Produktbeschreibung
The author served in the United States Marine Corps during WWII and was a combat veteran in the South Pacific. He graduated from Temple University, magna cum laude, earning his Doctoral Degree in Urban Education. He married Dorothy Stumbaugh and they were blessed with five children that have grown to ten grandchildren and ten great-grandchildren. He was employed by the Philadelphia School District until retirement and then moved to the Central Coast of California. As a member and California Chapter Chaplain of the Second Marine Division Association, he was appointed National Chaplain of the SMDA in 2003 and served until 2013. The National Chaplain of the SMDA is responsible to work with the Second Marine Division Chaplains in coordinating the Memorial Service at Camp Lejeune, NC each year at the Birthday Celebration of the Division. He is also responsible for coordinating the Memorial Service at each Annual Reunion of the SMDA at geographical locations across the United States. He is obviously responsible for any prayers necessary during the gatherings at each of the annual events, as well as being available to any individual who asks for prayer. During his tenure, he is responsible to present a Memorial Address at each of the two events annually. He has been awarded the Most Distinguished Award for his services. Each chapter in this book is a Memorial Address delivered by Dr. DeMarco to the Marines, families and friends at Camp Lejeune, NC and also to the Association Reunion gathering at various locations across America. All the material in this book deals largely with American history, political science in general and the effects of religious thought of the times.