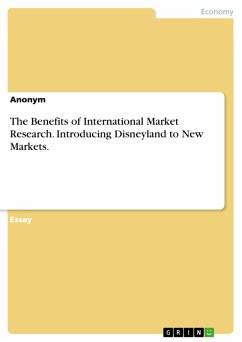 Essay from the year 2019 in the subject Economics - Macro-economics, general, grade: 2,3, , language: English, abstract: This paper will look into the benefits of international market research for a global company like The Walt Disney Company when expanding to foreign markets on the example of the financial disaster of Disneyland Paris. After an introduction to international market research and the Walt Disney Company, secondary market data of Disneyland California and Paris will be compared. From the data a conclusion will be drawn, if a global company like the Walt Disney Company can operate…mehr