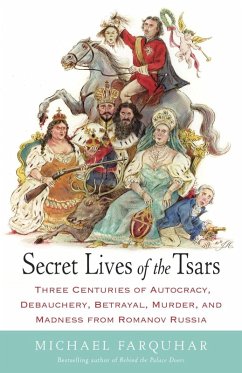 Andere Kunden interessierten sich auch für
Produktbeschreibung
"Michael Farquhar doesn't write about history the way, say, Doris Kearns Goodwin does. He writes about history the way Doris Kearns Goodwin's smart-ass, reprobate kid brother might. I, for one, prefer it."-Gene Weingarten, two-time Pulitzer Prize winner and Washington Post columnist Scandal! Intrigue! Cossacks! Here the world's most engaging royal historian chronicles the world's most fascinating imperial dynasty: the Romanovs, whose three-hundred-year reign was remarkable for its shocking violence, spectacular excess, and unimaginable venality. In this incredibly entertaining history, Michael Farquhar collects the best, most captivating true tales of Romanov iniquity. We meet Catherine the Great, with her endless parade of virile young lovers (none of them of the equine variety); her unhinged son, Paul I, who ordered the bones of one of his mother's paramours dug out of its grave and tossed into a gorge; and Grigori Rasputin, the "Mad Monk," whose mesmeric domination of the last of the Romanov tsars helped lead to the monarchy's undoing. From Peter the Great's penchant for personally beheading his recalcitrant subjects (he kept the severed head of one of his mistresses pickled in alcohol) to Nicholas and Alexandra's brutal demise at the hands of the Bolsheviks, Secret Lives of the Tsars captures all the splendor and infamy that was Imperial Russia. Praise for Secret Lives of the Tsars "An accessible, exciting narrative . . . Highly recommended for generalists interested in Russian history and those who enjoy the seamier side of past lives."-Library Journal (starred review) "An excellent condensed version of Russian history . . . a fine tale of history and scandal . . . sure to please general readers and monarchy buffs alike."-Publishers Weekly "Tales from the nasty lives of global royalty . . . an easy-reading, lightweight history lesson."-Kirkus Reviews "Readers of this book may get a sense of why Russians are so tolerant of tyrants like Stalin and Putin. Given their history, it probably seems normal."-The Washington Post

Produktdetails
Autorenporträt
Michael Farquhar, a former writer and editor at The Washington Post, is the bestselling author of the critically praised Behind the Palace Doors, as well as the national bestsellers A Treasury of Royal Scandals, A Treasury of Great American Scandals, A Treasury of Deception, and A Treasury of Foolishly Forgotten Americans. His work has been featured in a number of national publications, and he has appeared as a commentator on such programs as History's top-rated Russia: Land of the Tsars and The French Revolution.
Kundenbewertungen
Schreiben Sie eine Kundenbewertung zu diesem Produkt und gewinnen Sie mit etwas Glück einen 15,- EUR bücher.de–Gutschein!
Bewertung schreiben Bewertung schreiben
Mehr zum Thema