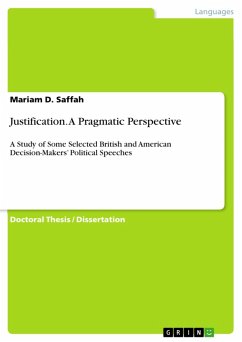 Doctoral Thesis / Dissertation from the year 2018 in the subject Speech Science / Linguistics, University of Babylon (College of Education), course: Linguistics, language: English, abstract: Justification may be a prerequisite for any claim that is made, whether the claim is about a weather forecast by a meteorologist, an accusation of negligence by an employee against his or her employers, or a doctor's diagnosis. Justification denotes a communicative act which is meant to compensate for the violation of a certain norm or to enable recipients to understand better something unpredicted or…mehr