Understanding how language is changing 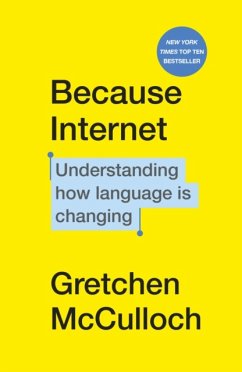 Understanding how language is changing

The extent to which the internet has altered the norms of the English language is taken stock of from the nuances of tildes to the likes of 'LOL', following the patterns behind seemingly absurd slang forms.

Andere Kunden interessierten sich auch für
Produktbeschreibung
The extent to which the internet has altered the norms of the English language is taken stock of from the nuances of tildes to the likes of 'LOL', following the patterns behind seemingly absurd slang forms.
Produktdetails
Produktdetails
Autorenporträt
Gretchen McCulloch writes about linguistics for a general audience, especially internet language. She writes the Resident Linguist column at Wired. McCulloch has a master's in linguistics from McGill University, runs the blog All Things Linguistic, and cohosts the Lingthusiasm podcast. She lives in Montreal, but also on the internet. www.gretchenmcculloch.com
Rezensionen
McCulloch is such a disarming writer lucid, friendly, unequivocally excited about her subject that I began to marvel at the flexibility of the online language she describes, with its numerous shades of subtlety. The New York Times

McCulloch s book is a good start in guiding readers to consider the wild language of the internet as a thing of wonder a valuable feature, not a bug. The Wall Street Journal

[An] effervescent study of how the digital world is transfiguring English. . . . [McCulloch s] almost political thesis the more voices, the better rebukes both the élitism of traditional grammar snobs and the cliquishness of, say, Tumblr. It s a vision of language as one way to make room for one another. The New Yorker

Rather than obsessing about what the internet is doing to language, [Because Internet] largely focuses on what can be learned about language from the internet. . . . McCulloch's book is about the birth of a new medium. The Economist

A compelling narrative rich with examples from her own online activities, a healthy dose of humor, and plenty of cat memes the breadth of topics covered from conversation analysis to meme culture to the development of texting as we now know it makes this book useful, engaging, and enjoyable. Science

Gretchen McCulloch is the internet s favorite linguist, and this book is essential reading. Reading her work is like suddenly being able to see the matrix. She explains the hows and the whys of the ways we talk online with the deepest empathy, understanding, and compassion. Jonny Sun, author of everyone's a aliebn when ur a aliebn too

Sometimes it seems like the internet is a seething brew of ugliness and misery. So it's nice to remember that, as well as the lawless drudgery, there are complex human systems that, intentional or not, create something totally new. Internet linguist (damn!) Gretchen McCulloch explores the ever-changing language of online. Elle, 30 Best Books to Read this Summer

McCulloch lays out the ways in which online lingo, from emojis to GIFs to acronyms like "lol" and "omg," has become a vital part of modern communication. It's also an analog window into how the evolution of digital communication mirrors the shifts in word usage that have happened over generations. Wired, Must-Read Books of Summer

Gretchen McCulloch's Because Internet is not your English teacher's grammar guide not even close. Self-described internet linguist McCulloch traces how the web has changed the way we communicate whether through emoji, lowercase letters. or cat memes and makes a compelling, entertaining argument that this change is good for the English language as a whole. Real Simple

In prose at once scholarly and user-friendly, McCulloch unpacks the evolution of language in the digital age, providing a comprehensive survey of everything from the secret language of emojis to the appeal of animal memes. Esquire

We know lols, emojis and hashtags are altering our discourse. Linguist McCulloch counts and revels in the ways. Give it to your favorite stickler. People

English's great strength is its informality and the internet has created a golden age for studying this flexibility: McCulloch's lively and delightful survey of these new findings is a must for anyone who loves language in all its expressive forms. Cory Doctorow

It doesn't matter if you're baffled by the linguistics of the internet or you're the first person to share memes with your friends; this book is so absorbing it will immediately draw you in. PopSugar

Funny as well as informative. Because Internet just might lead you to see the internet, and how you (and your kids) use it, in a whole new way. BookPage (starred review)
A funny and fascinating examination of the evolution of language in the digital age. Publishers Weekly

An insightful analysis of language and the internet of right now, in-depth yet accessible to any internet generation. Booklist

A fun read for Internet people of all generations .Recommended for web and language nerds alike, encompassing illuminating facts on the origin of acronyms, memes, and digital tone of voice. Library Journal

Because Internet is a rare gem: a groundbreaking scholarly study that's also approachable, personable, and funny. McCulloch guides the reader through the seeming disorder of internet-influenced communications and deftly contextualizes all of it: memes and gifs, emoji and emoticons, weird punctuation and no punctuation. Her enthusiasm for language is matched by her command over the subject; if you're worried that the internet has killed language, McCulloch's extensive examination will convince you otherwise. Because Internet is an absolute unit: a unique linguistic study, a history of the internet, a how-to, and an encouragement that the omgs and cat pictures have only brought us closer together. Kory Stamper, author of Word by Word

Because Internet is the most up-to-date and comprehensive guide to the way informal internet language has evolved and is evolving. Its historical perspective will illuminate every generation of internet users: oldies will get a clear picture of what young people are up to; younglings will discover the origins of their latest linguistic fashions. Gretchen McCulloch writes with great common sense, an eye for the apt illustration, an appealing sense of humour, and a real concern for explanation. She doesn't just describe language trends: she investigates why they've taken place, and it's her insightful interpretations that give this book its special appeal. David Crystal, author of Shakespeare s Words and How Language Works

Because Internet is a joyful exploration of the newest creative upswell of English if you want to understand why you love emoji, share memes, and don't make a sound when lol-ing, you need this book! Erin McKean, founder of the online dictionary Wordnik.com