Regional Integration Process in South America: Analysis of institutions and policies of regional integration under the EU Framework (eBook, PDF) 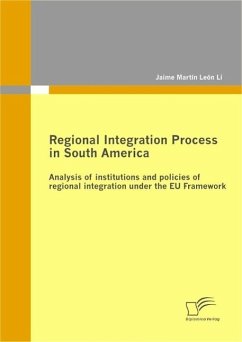 Regional Integration Process in South America: Analysis of institutions and policies of regional integration under the EU Framework (eBook, PDF)

Andere Kunden interessierten sich auch für
Produktbeschreibung
This book presents a review of the South American integration process in a global context, with the main factors of success and failure, by comparing it with the European Union development. It also presents South American integration in a regional context; with its subregional pacts and the development of the South American Union of Nations (UNASUR) and how the regionalization faced its stagnation and changed its objectives, replicating and amplifying successful experiences in the integration process. The book presents comparisons between South American and EU integration structures and policies featuring the supranational executive bodies concerned, the judicial structures, the legislative functions and the monetary systems plus common foreign and security policy and common social and development policy of both entities: three supranational institutions and three common policies that define a regional bloc. To avoid diffusing the research, only one of those dimensions receives a deeper analysis: the supranational executive bodies comparison. The second part of this book introduces the Game Theory, a shared-decision model with two or more players that have different priorities for the same decision. The Game Theory analysis is used here to evaluate two typical scenarios of South American regional policy conflicts, pointing out the important role of the exertion of supranational executive power to foster the integration process. The conclusions focus on the main challenges: the existing asymmetries between South American states and the lack of a clear leadership in the region; giving a positive assessment to the new functional approach taken by South American nations. This approach could offer them good chances to foster regional development and allow progress of South American integration. The final comments propose new fields for the Game Theory technique in the integration process analysis.

Produktdetails
Autorenporträt
Jaime Martín León Li, born in Peru, 1974. Industrial Engineer, M.A. in European Studies and M.B.A. (Candidate) from the Bremen University of Applied Sciences, Hochschule Bremen. His professional background includes economical development, resource management, lean manufacturing and other areas in public and private administration. His interests in international relationships were awake when he was granted with a scholarship for a professional training in Germany, where he was fascinated with the integration processes among European States, and wondered himself the reasons why that experience did not work so well in South America. This book portrays his findings and - recalling his professional background - his explanations through the "Game Theory" decision model.
Kundenbewertungen
Schreiben Sie eine Kundenbewertung zu diesem Produkt und gewinnen Sie mit etwas Glück einen 15,- EUR bücher.de–Gutschein!
Bewertung schreiben Bewertung schreiben