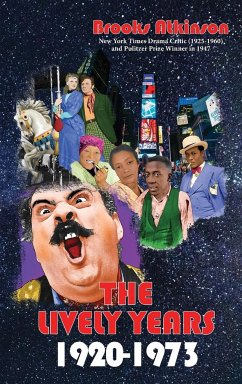 Brooks Atkinson's (1894-1984) long shadow fell on the Broadway theatre district for decades. He was a voice that kept the "Broadway" in Times Square, even when it appeared that the star of this Mecca of Entertainment would dim. Though Broadway changed over time in content and grandeur, his focus on the writing and the acting was clear and motivating for both the players and the audience. A "Brooks Atkinson" hoorah meant money for the producer and playwright, fame for the stars, and entertainment for the crowds, while his razzie foretold a quick decline in attendance and, often, a kiss of death…mehr

Andere Kunden interessierten sich auch für
Produktbeschreibung
Brooks Atkinson's (1894-1984) long shadow fell on the Broadway theatre district for decades. He was a voice that kept the "Broadway" in Times Square, even when it appeared that the star of this Mecca of Entertainment would dim. Though Broadway changed over time in content and grandeur, his focus on the writing and the acting was clear and motivating for both the players and the audience. A "Brooks Atkinson" hoorah meant money for the producer and playwright, fame for the stars, and entertainment for the crowds, while his razzie foretold a quick decline in attendance and, often, a kiss of death for the production. The Lively Years describes those plays that from 1920-1973 shifted in focus. No longer solely concerned about contrived but happy endings, the theatre grew by showing the warts of society and people who are never as perfect as we would prefer. As a consequence, "The theatre not only reflected but also created public opinion;" and its plays became "pertinent to the human tradition." "It is in historical projects such as this one that Atkinson performs the ultimate connecting of the dots over long periods of time. We see him recognizing other decade-long patterns, … and continuing to elevate his impression of the astonishing creative outbursts that belied the Great Depression's grueling hardship. The defining characteristics for him - the conclusions he always seeks - have to do with the fundamental originality of the works in question, and in what way they struggle with, or somehow shed new light on, real-life predicaments." Nancy Malitz Founding music critic at USA Today Editor, Classical Voice North America Publisher, Chicago On the Aisle
Produktdetails
Autorenporträt
JUSTIN BROOKS ATKINSON (November 28, 1894 - January 14, 1984) was an American theatre critic. He worked for The New York Times from 1925 to 1960. In his obituary, the Times called him "the theater's most influential reviewer of his time." A war correspondent during World War II, he received the Pulitzer Prize in 1947 for his work as the Moscow correspondent for the Times. Atkinson attended Harvard University where he began writing for the Boston Herald. He graduated from Harvard in 1917, and worked at the Springfield Daily News and the Boston Evening Transcript, where he was assistant to the drama critic. In 1922, he became the editor of the New York Times Book Review, and in 1925 the drama critic. Atkinson married Oriana MacIlveen, a writer, in August 1926. On the drama desk, Atkinson quickly became known for his commitment to new kinds of theater-he was one of the first critical admirers of Eugene O'Neill-for his interest in all kinds of drama, including off-Broadway productions. In 1928, he said of the new play The Front Page, "No one who has ground his heels in the grime of a police headquarters press room will complain that this argot misrepresents the gentlemen of the press." In 1932 Atkinson embraced the witty, direct writing style that became his hallmark. His reviews were reputed to have the power to make or break a new stage production: for example, his panning in 1940 of Lawrence Riley's Return Engagement led to that comedy's closure after only eight performances, this despite the fact that Riley's previous comedy, Personal Appearance, had lasted for over 500 performances on Broadway. Atkinson, who was dubbed "the conscience of the theater," was not comfortable with the influence he wielded over the Broadway box office. After the bombing of Pearl Harbor in December 1941, Atkinson requested a reassignment to war coverage, and the New York Times sent him to the front lines as a war correspondent in China, where he covered the second Sino-Japanese war until 1945. While in China, he visited Mao Tse-Tung in Yenan and was captivated by Mao, writing favorably on the Chinese Communist Party (CCP) movement, and against the Nationalist government of Chiang Kai-shek, which he saw as reactionary and corrupt. After visiting Yenan, he wrote that the CCP political system was best described as an "agrarian or peasant democracy, or as a farm labor party." Atkinson viewed the Chinese Communist Party as Communist in name only and more democratic than totalitarian; the Times effusively titled his article "Yenan, a Chinese Wonderland City. " After the end of the war, Atkinson stayed only briefly in New York before being sent to Moscow as a press correspondent; his work as the Moscow correspondent for the Times earned him a Pulitzer Prize for Correspondence in 1947. After returning from the Soviet Union, Atkinson was reassigned to the drama desk, where he remained until his retirement in 1960. He is given much credit for the growth of Off-Broadway into a major theatrical force in the 1950s, and has been cited by many influential people in the theatre as crucial to their careers. David Merrick's infamous spoof ad for Subways Are For Sleeping-in which he hired seven ordinary New Yorkers who had the same names as prominent drama critics to praise his musical-had to wait for Atkinson's retirement, because Merrick could not find anyone with the right name. There was only one Brooks Atkinson in New York City. Atkinson was elected a Fellow of the American Academy of Arts and Sciences in 1960. He came briefly out of retirement in 1965 to write a favorable review of Man of La Mancha; his review was printed on the first page of the show's original souvenir program. After his retirement, he became a member of The Players who organized a tribute dinner for Atkinson's 80th birthday which was attended by Arthur Miller, Elia Kazan, and other prominent actors and play
Kundenbewertungen
Schreiben Sie eine Kundenbewertung zu diesem Produkt und gewinnen Sie mit etwas Glück einen 15,- EUR bücher.de–Gutschein!
Bewertung schreiben Bewertung schreiben