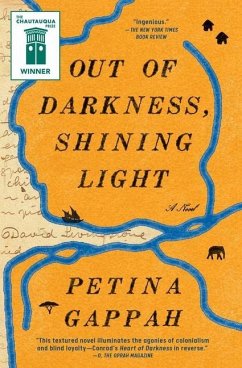 Jetzt bewertenJetzt bewerten
Andere Kunden interessierten sich auch für
Produktdetails
Autorenporträt
Gappah, Petina
Petina Gappah is a widely translated Zimbabwean writer. She is the author of two novels, Out of Darkness, Shining Light; The Book of Memory; and two short story collections, Rotten Row and An Elegy for Easterly. Her work has been short-listed for the Orwell Prize, the Sunday Times EFG Short Story Award, the Los Angeles Times Book Prize, the PEN/Open Book Award, the Frank O'Connor International Short Story Award, and the Prix Femina (etranger), among other honors. She is the recipient of the Guardian First Book Award and the McKitterick Prize from the Society of Authors. A lawyer specializing in international trade and investment as well as a writer, Petina currently lives in Harare, Zimbabwe.
Rezensionen
A Lit Hub, Millions, and Buzzfeed Most Anticipated Book "Petina Gappah lists at least 30 books in the bibliography of her scrupulously researched new novel. This being the case, one imagines the author might well be dealing with subject matter that leaves precious little room for her to reinvent, to present us with a new view of a man whose story has been so thoroughly picked over. However, Gappah has chosen an ingenious way to approach Livingstone's life: She focuses on his death...After all, the real heroes of this carefully crafted novel are Halima and Wainwright and the other Africans history has hitherto condemned to suffer in silence. It is to the novel's credit that after 150 years we can now hear their voices." -The New York Times Book Review "David Livingstone, the 19th-century Scottish missionary who set out to find the source of the Nile, casts a long shadow over East Africa, and Gappah explores his legacy in her new novel. Narrated by Halima, Livingstone's cook and slave, and Jacob, a pious freed slave, as Livingstone's corpse is taken to the coast of Africa, the story offers a fresh look at the enduring history of colonialism." -The New York Times, 17 New Books to Watch For in September "Based on Livingstone's journals and narrated by his gossipy cook and a freedman with a messiah complex, this textured novel illuminates the agonies of colonialism and blind loyalty-Conrad's heart of darkness in reverse." -O, the Oprah Magazine "Ambitious...There are love triangles, power struggles, brushes with slave traders, clashes with hostile strangers-even murder. Livingstone left "a track of light where the white men who followed him could go in perfect safety," Gappah writes, referring to the ensuing Scramble for Africa, in which the continent was divided up among European powers. Gappah's characters foresee but cannot stop a future that haunts the novel." -The New Yorker "Searing, poignant, often hilarious...Gappah's treatment of her characters' odyssey, by turns playful and tragic, is underpinned by a larger theme: the legacy of colonization...The result is an intricate storytelling that delves deep into the disturbing yet indelible relationship between two continents, with the enigmatic Livingstone both an avatar of colonial aggression and a figure beloved by the people who knew him best. Out of Darkness, Shining Light beautifully evokes the moral ambiguities that lurk within the human heart, revealing a talent that continues to grow from book to book." -The Minneapolis Star-Tribune "Petina Gappah's work of historical fiction delves into the story of two African servants of famed 19th-century explorer David Livingstone. After Livingstone's death, the pair are among those who transport his body, and his notes, 1,000 miles to ensure the body's safe return to England. The novel glows with the insightful voices of the two servants and the strength of their devotion." -Christian Science Monitor, Best Books of September "Perhaps no story was as ripe for the Wide Sargasso Sea treatment (the revision of a classic by marginalized voices) as the tale of missionary David Livingstone's death in Africa. In contrasting styles, the Zimbabwean novelist lets two characters describe their trek across Africa with Livingstone's body, beautifully complicating the narrative." -Vulture, Best and Biggest Books to Read This Fall "Petina Gappah's novel is about exploration and adventure in nineteenth-century Africa-the captivating story of the loyal men and women who carried explorer and missionary Dr. Livingstone's body, his papers and maps, fifteen hundred miles across the continent of Africa, so his remains could be returned home to England and his work preserved there." -E! Online, 15 Books to Cozy Up with This Fall "We need novels like Gappah's Out of Darkness, Shining Light, for they remember the stories that have been papered over by history-by whiteness and empire...stories like Halima's and Jacob's, tol…mehr
Engrossing, beautiful, and deeply imaginative, Out of Darkness, Shining Light, is a novel that lends voice to those who appeared only as footnotes in history, yet whose final, brave act of loyalty and respect changed the course of it. An incredible and important book by a masterful writer. Yaa Gyasi
Kundenbewertungen
Schreiben Sie eine Kundenbewertung zu diesem Produkt und gewinnen Sie mit etwas Glück einen 15,- EUR bücher.de–Gutschein!
Bewertung schreiben Bewertung schreiben
Mehr zum Thema
Mehr aus der Kategorie