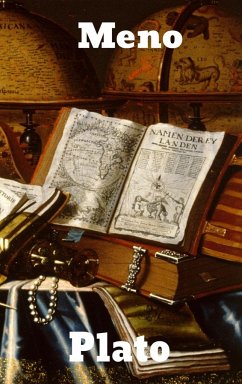 Meno is a Socratic dialogue written by Plato (Steph. 70-100). It appears to attempt to determine the definition of virtue, or arete, meaning virtue in general, rather than particular virtues, such as justice or temperance. The first part of the work is written in the Socratic dialectical style and Meno is reduced to confusion or aporia. In response to Meno's paradox (or the learner's paradox), however, Socrates introduces positive ideas: the immortality of the soul, the theory of knowledge as recollection (anamnesis), which Socrates demonstrates by posing a mathematical puzzle to one of Meno's…mehr

Andere Kunden interessierten sich auch für
Produktbeschreibung
Meno is a Socratic dialogue written by Plato (Steph. 70-100). It appears to attempt to determine the definition of virtue, or arete, meaning virtue in general, rather than particular virtues, such as justice or temperance. The first part of the work is written in the Socratic dialectical style and Meno is reduced to confusion or aporia. In response to Meno's paradox (or the learner's paradox), however, Socrates introduces positive ideas: the immortality of the soul, the theory of knowledge as recollection (anamnesis), which Socrates demonstrates by posing a mathematical puzzle to one of Meno's slaves, the method of hypothesis, and, in the final lines, the distinction between knowledge and true belief. Plato's Meno is a Socratic dialogue in which the two main speakers, Socrates and Meno (also transliterated as Menon), discuss human virtue: whether or not it can be taught, and what it is. Additional participants in the dialogue include one of Meno's slaves and the Athenian politician Anytus, a prosecutor of Socrates with whom Meno is friendly. Meno is visiting Athens from Thessaly with a large entourage of slaves attending him. Young, good-looking and well-born, Meno is a student of Gorgias, a prominent sophist whose views on virtue clearly influence Meno's. He claims early in the dialogue that he has held forth many times on the subject of virtue, and in front of large audiences. One feature of the dialogue is Socrates' use of one of Meno's slaves to demonstrate his idea of anamnesis, that certain knowledge is innate and "recollected" by the soul through proper inquiry. The dialogue begins with Meno asking Socrates to tell him if virtue can be taught. Socrates says that he does not know what virtue is, and neither does anyone else he knows.[1] Meno responds that, according to Gorgias, virtue is different for different people, that what is virtuous for a man is to conduct himself in the city so that he helps his friends, injures his enemies, and takes care all the while that he personally comes to no harm. Virtue is different for a woman, he says. Her domain is the management of the household, and she is supposed to obey her husband. He says that children (male and female) have their own proper virtue, and so do old men-free or slaves.[2] Socrates objects: there must be some virtue common to all human beings. Socrates rejects the idea that human virtue depends on a person's sex or age. He leads Meno towards the idea that virtues are common to all people, that temperance (sophrosunê- exercising self-control) and justice (dikê, dikaiosunê- refraining from harming other people) are virtues even in children and old men.[3] Meno proposes to Socrates that the "capacity to govern men" may be a virtue common to all people. Socrates points out to the slaveholder that "governing well" cannot be a virtue of a slave, because then he would not be a slave. One of the errors that Socrates points out is that Meno lists many particular virtues without defining a common feature inherent to virtues which makes them thus. Socrates remarks that Meno makes many out of one, like somebody who breaks a plate.[5] Meno proposes that virtue is the desire for good things and the power to get them. Socrates points out that this raises a second problem-many people do not recognize evil.[6] The discussion then turns to the question of accounting for the fact that so many people are mistaken about good and evil and take one for the other. Socrates asks Meno to consider whether good things must be acquired virtuously in order to be really good.[7] Socrates leads onto the question of whether virtue is one thing or many.
Produktdetails
Autorenporträt
Plato (428/427 or 424/423 - 348/347 BC) was an Athenian philosopher during the Classical period in Ancient Greece, founder of the Platonist school of thought, and the Academy, the first institution of higher learning in the Western world. He is widely considered the pivotal figure in the history of Ancient Greek and Western philosophy, along with his teacher, Socrates, and his most famous student, Aristotle.[a] Plato has also often been cited as one of the founders of Western religion and spirituality.[4] The so-called Neoplatonism of philosophers like Plotinus and Porphyry influenced Saint Augustine and thus Christianity. Alfred North Whitehead once noted: "the safest general characterization of the European philosophical tradition is that it consists of a series of footnotes to Plato."[5] Plato was the innovator of the written dialogue and dialectic forms in philosophy. Plato is also considered the founder of Western political philosophy. His most famous contribution is the theory of Forms known by pure reason, in which Plato presents a solution to the problem of universals known as Platonism (also ambiguously called either Platonic realism or Platonic idealism). He is also the namesake of Platonic love and the Platonic solids. His own most decisive philosophical influences are usually thought to have been along with Socrates, the pre-Socratics Pythagoras, Heraclitus and Parmenides, although few of his predecessors' works remain extant and much of what we know about these figures today derives from Plato himself.[b] Unlike the work of nearly all of his contemporaries, Plato's entire body of work is believed to have survived intact for over 2,400 years.[7] Although their popularity has fluctuated over the years, the works of Plato have never been without readers since the time they were written
Kundenbewertungen
Schreiben Sie eine Kundenbewertung zu diesem Produkt und gewinnen Sie mit etwas Glück einen 15,- EUR bücher.de–Gutschein!
Bewertung schreiben Bewertung schreiben