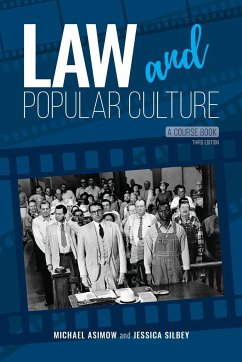 Both law and popular culture pervade our lives. Movies and television shape our perception of law and change how players in the legal system behave. Now in its third edition, Law and Popular Culture: A Course Book explores the interface between these enormously important subjects. Jessica Silbey joins Michael Asimow as a co-author of the book. Each chapter examines a particular law-related subject, such as the adversary system, the life of lawyers, legal education, or family law. Each chapter is structured around a legally-themed film or television show, such as Philadelphia, To Kill a…mehr

Andere Kunden interessierten sich auch für
Produktbeschreibung
Both law and popular culture pervade our lives. Movies and television shape our perception of law and change how players in the legal system behave. Now in its third edition, Law and Popular Culture: A Course Book explores the interface between these enormously important subjects. Jessica Silbey joins Michael Asimow as a co-author of the book. Each chapter examines a particular law-related subject, such as the adversary system, the life of lawyers, legal education, or family law. Each chapter is structured around a legally-themed film or television show, such as Philadelphia, To Kill a Mockingbird, The Lincoln Lawyer, or LA Law, treating each of them as both a cultural text and a legal text. The book is written in an engaging style without theoretical jargon and can serve as a basic text for undergraduate or graduate courses and seminars. It can be taught by anyone who enjoys pop culture and is interested in law. An instructor's manual is available on request.
Produktdetails
Autorenporträt
MICHAEL ASIMOW is Dean's Executive Professor of Law, Santa Clara Law School, and Professor of Law Emeritus, UCLA School of Law. He teaches law and popular culture as well as contract law, taxation, and administrative law. Asimow is the editor of Lawyers In Your Living Room: Law on Television (2009) and co-author with Paul Bergman of Real to Reel: Truth and Trickery in Courtroom Movies (2021) and has written numerous articles about law and pop culture.
Inhaltsangabe
Contents: Introduction to Law and Popular Culture - The Adversary System and the Trial Genre. Assigned Film: Anatomy of a Murder (1959) - Lawyers as Heroes. Assigned Film: To Kill a Mockingbird (1962) - Lawyers as Villains. Assigned Film: The Verdict (1982) - The Life of Lawyers. Assigned Film: Counsellor at Law (1933) - Legal Education. Assigned Film: The Paper Chase (1973) - Law on Television. Assigned Material: Boston Legal , Season 1, disk 1 (episodes 1-4) - The Criminal Justice System. Assigned Television Show: Law & Order (Season 5, episodes 1-4) - The Jury. Assigned Film: 12 Angry Men (1957) - Military Justice. Assigned Film: A Few Good Men (1992) - The Death Penalty. Assigned Film: Dead Man Walking (1996) - The Civil Justice System. Assigned Film: A Civil Action (1998) - Civil Rights. Assigned Film: Philadelphia (1993) - Family Law. Assigned Film: Kramer vs. Kramer (1979).
Rezensionen
"An understanding of the interrelationship between law and popular culture is key to shaping the future of law and justice in contemporary society. While a number of areas may reflect and influence popular culture, one of the most powerful is cinematic entertainment. The second edition of Law and Popular Culture: A Course Book retains all of its original brilliance as the guide for creating a graduate or undergraduate course focusing on how the portrayal of attorneys and the legal system in film and on television shapes public perception of lawyers, creates viewer expectations regarding law and justice, and may even influence the conduct of practicing attorneys and judges." (Taylor Simpson-Wood, Professor of Law, Barry University, Dwight O. Andreas School of Law)
" Law and Popular Culture: A Course Book is a welcome addition to the teaching literature in this important and burgeoning field. It may be used as a primary or secondary text, with a concise introductory overview followed by analytical chapters on important individual films or television shows in the context of this dynamic field of study. This structure, together with thoughtful organization (initially by broad topic such as 'the adversary system', and later by subject matter, either civil or criminal) facilitates teacher flexibility in which chapters to include and which films or television shows (or substitutes) to assign for student viewing before each class. I highly recommend this book." (Donald Papy, Adjunct Faculty, University of Miami School of Law)
"While teaching an honors class on Law and Society, I found the Asimow - Mader book to be a constant source of quotable and relevant source material for classroom use. The chapters were especially nuanced in combining social science findings with insights from cinema studies. After retirement, I continue to find the chapters relevant in film lectures on legal themes to audiences of retirees. A second edition will make an original work only more relevant and up to date." (Edward Gross, University of Washington, Dept of Sociology (emeritus))
"Michael Asimow and Shannon Mader convincingly argue that popular representations of law are crucial to how people understand and perceive the legal system. This is an important, social constructionist insight that is not stressed often enough in law schools. The book is very well organized and shines in its emphasis on cinematic techniques, using films as illuminating case studies through which to more fully understand the American criminal and civil justice systems. The authors' cultural legal approach is exciting because it treats popular culture as just as worthy of study as the cases and statutes normally studied in law schools. This is the leading text for Law and Popular Culture courses - enjoy!" (Dr. Jennifer L. Schulz, Associate Dean and Associate Professor, Faculty of Law, University of Manitoba, Canada)
"Using both familiar ('Anatomy of a Murder', 'Twelve Angry Men') and less known texts ('Counsellor at Law', 'Philadelphia') from a variety of eras, Law and Popular Culture offers an excellent framework for introducing college students to the study of film and its pervasive influence on our understanding of the law and lawyers. Scholarly yet accessible, it works not only as an authoritative text on popular culture, but also as a clear and concise guide to understanding how our legal system functions, making it easily adaptable to diverse audiences, including freshmen students. The questions included at the end of each chapter work exceptionally well in generating spirited yet thoughtful class discussion and debate." (Gary Peter, College of Education and Human Development, University of Minnesota)
…mehr
Kundenbewertungen
Schreiben Sie eine Kundenbewertung zu diesem Produkt und gewinnen Sie mit etwas Glück einen 15,- EUR bücher.de–Gutschein!
Bewertung schreiben Bewertung schreiben