The Making of a Marchioness (Emily Fox-Seton, Complete) (eBook, ePUB) 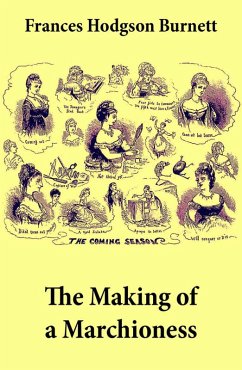 The Making of a Marchioness (Emily Fox-Seton, Complete) (eBook, ePUB)

Andere Kunden interessierten sich auch für
Produktbeschreibung
This carefully crafted ebook: "The Making of a Marchioness + The Shuttle (2 Unabridged Classic Romances)" contains 2 books in one volume and is formatted for your eReader with a functional and detailed table of contents. Frances Hodgson Burnett worked on two books simultaneously: The Shuttle, a longer and more complicated book; and The Making of a Marchioness, which she wrote in a few weeks and published to good reviews. it is about the rejuvenating effects of Americans and American money on a somewhat decadent English aristocracy. The Making of a Marchioness (1901) It was originally published in two parts: the first tells the fairy tale-like story of how our heroine, Emily Fox-Seton, became the Marchioness of Walderhurst. The second, originally titled The Methods of Lady Walderhurst, is a down-to-earth portrayal of the realities of Victorian marriage, with a bit of a Victorian sensation vibe to it. The Shuttle (1907) It was begun in 1900 but frequently abandoned while its author, Frances Hodgson Burnett, wrote several other books, including, most famously, The Making of a Marchioness. The Shuttle is about American heiresses marrying English aristocrats; by extension it is about the effect of American energy and dynamism rejuvenating a somewhat decadent English aristocracy: Rosalie Vanderpoel, the daughter of an American multimillionaire marries an impoverished English baronet and goes to live in England. She all but loses contact with her family in America. Years later her younger sister Bettina, beautiful, intelligent and extremely rich, goes to England to find what has happened to her sister. She finds Rosalie shabby and dispirited, cowed by her husband's ill treatment. Bettina sets about to rectify matters... Frances Eliza Hodgson Burnett (1849 - 1924) was an English-American playwright and author. She is best known for her children's stories, in particular Little Lord Fauntleroy , A Little Princess, and The Secret Garden.

Produktdetails
Autorenporträt
Frances Eliza Hodgson Burnett (24 November 1849 - 29 October 1924) was an English-American novelist and playwright. She is best known for the three children's novels Little Lord Fauntleroy (published in 1885-1886), A Little Princess (1905), and The Secret Garden (1911). She was born in Cheetham, England. After her father died in 1852, the family fell on straitened circumstances and in 1865 immigrated to the United States, settling near Knoxville, Tennessee. There Frances began writing to help earn money for the family, publishing stories in magazines from the age of 19. Burnett enjoyed socializing and lived a lavish lifestyle. Beginning in the 1880s, she began to travel to England frequently and in the 1890s bought a home there where she wrote The Secret Garden. She settled in Nassau County, Long Island, where she died in 1924.
Kundenbewertungen
Schreiben Sie eine Kundenbewertung zu diesem Produkt und gewinnen Sie mit etwas Glück einen 15,- EUR bücher.de–Gutschein!
Bewertung schreiben Bewertung schreiben
Mehr zum Thema