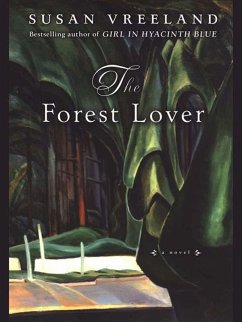 In her acclaimed novels, Susan Vreeland has given us portraits of painting and life that are as dazzling as their artistic subjects. Now, in The Forest Lover, she traces the courageous life and career of Emily Carr, who-more than Georgia O'Keeffe or Frida Kahlo-blazed a path for modern women artists. Overcoming the confines of Victorian culture, Carr became a major force in modern art by capturing an untamed British Columbia and its indigenous peoples just before industrialization changed them forever. From illegal potlatches in tribal communities to artists' studios in pre-World War I Paris,…mehr

Andere Kunden interessierten sich auch für
Produktbeschreibung
In her acclaimed novels, Susan Vreeland has given us portraits of painting and life that are as dazzling as their artistic subjects. Now, in The Forest Lover, she traces the courageous life and career of Emily Carr, who-more than Georgia O'Keeffe or Frida Kahlo-blazed a path for modern women artists. Overcoming the confines of Victorian culture, Carr became a major force in modern art by capturing an untamed British Columbia and its indigenous peoples just before industrialization changed them forever. From illegal potlatches in tribal communities to artists' studios in pre-World War I Paris, Vreeland tells her story with gusto and suspense, giving us a glorious novel that will appeal to lovers of art, native cultures, and lush historical fiction.

Produktdetails
Autorenporträt
Coming out of the Louvre for the first time in 1971, dizzy with new love, I stood on Pont Neuf and made a pledge to myself that the art of this newly discovered world in the Old World would be my life companion. Never had history been more vibrant, its voices more resonating, its images more gripping. On this first trip to Europe, I felt myself a pilgrim: To me, even secular places such as museums and ruins were imbued with the sacred. Painting, sculpture, architecture, music, religious and social history--I was swept away with all of it, wanting to read more, to learn languages, to fill my mind with rich, glorious, long-established culture wrought by human desire, daring, and faith. I wanted to keep a Gothic cathedral alive in my heart. My imagination exploded with the gaiety of the Montmartre dancers at Moulin de la Galette, the laborer whose last breath in his flattened chest was taken under the weight of a stone fallen from the Duomo under construction in Florence, the apprentice who cut himself preparing glass for the jeweled windows of Sainte Chapelle, the sweating quarry worker aching behind his crowbar at Carrara to release a marble that would become the Pietà. In a fashion I couldn't imagine then, I have been true to this pledge. I have brought to life the daughter of the Dutch painter Vermeer who secretly yearned to paint the Delft she loved. I've given voice to the Italian Baroque painter Artemisia Gentileschi, raped at seventeen by her painting teacher, the first woman to paint large scale figures from history and scripture previously reserved for men. On my own continent, I've entered deep British Columbian forests with Emily Carr, whose love for native people took her to places proper white women didn't go. My imagination has followed Modigliani's daughter around Paris searching for shreds of information about the father she never knew. I've imagined myself a poor wetnurse, bereaved of her own baby so that a rich woman, Berthe Morisot, might paint. I've taken my seventeenth century Tuscan shoemaker to Rome to have his longed-for religious experience under the Sistine ceiling. I've followed Renoir's models to cabarets and boat races, to war and elopement, to the Folies-Bergère and luncheons by the Seine.

Now some facts as to how I arrived there: After graduating from San Diego State University, I taught high school English in San Diego beginning in 1969 and retired in 2000 after a 30-year career. Concurrently, I began writing features for newspapers and magazines in 1980, taking up subjects in art and travel, and publishing 250 articles. I ventured into fiction in 1988 with What Love Sees, a biographical novel of a woman's unwavering determination to lead a full life despite blindness. The book was made into a CBS television movie starring Richard Thomas and Annabeth Gish. My short fiction has appeared in The Missouri Review, Ploughshares, New England Review, Confrontation, Alaska Quarterly Review, Manoa, Connecticut Review, Calyx, Crescent Review, So To Speak and elsewhere.

My art-related fiction, products of my pledge on Pont Neuf:Girl in Hyacinth Blue, 1999, and a Hallmark Hall of Fame production in 2003, tracing an alleged Vermeer painting through the centuries revealing its influence on those who possessed it. The Passion of Artemisia, 2002, disclosing the inner life of Artemisia Gentileschi, Italian Baroque painter who empowered her female heroines with her own courage. The Forest Lover, 2004, following the rebel Canadian painter, Emily Carr, seeking the spiritual content of her beloved British Columbia by painting its wild landscape and its native totemic carvings. Life Studies, 2005, stories revealing Impressionist and Post-Impressionist painters from points of view of people who knew them, and showing that ordinary people can have profound encounters with art. Luncheon of the Boating Party, 2007, illuminating the vibrant, explosive Parisian world of la vie moderne surrounding Renoir as he creates his masterwork depicting the French art of living.

My work has been translated into twenty-five languages.

So, what have I learned from all of this? That entering the mind and heart of painters has taught me to see, and to be more appreciative of the beauties of the visible world. That I can agree with Renoir when he said, "I believe that I am nearer to God by being humble before his splendor (Nature)." That people are hungry for real lives behind the paintings. That readers' lives have been enriched, their sensibilities sharpened, even their goals for their own creative endeavors given higher priorities in their lives.

And especially this: Thanks to art, instead of seeing only one world and time period, our own, we see it multiplied and can peer into other times, other worlds which offer windows to other lives. Each time we enter imaginatively into the life of another, it's a small step upwards in the elevation of the human race. Consider this: Where there is no imagination of others' lives, there is no human connection. Where there is no human connection, there is no chance for compassion to govern. Without compassion, then loving kindness, human understanding, peace all shrivel. Individuals become isolated, and the isolated can turn resentful, narrow, cruel; they can become blinded, and that's where prejudice, holocausts, terrorism and tragedy hover. Art--and literature--are antidotes to that.