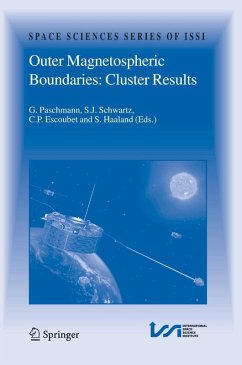 Andere Kunden interessierten sich auch für
Produktbeschreibung
When the stream of plasma emitted from the Sun (the solar wind) encounters Earth's magnetic field, it slows down and flows around it, leaving behind a cavity, the magnetosphere. The magnetopause is the surface that separates the solar wind on the outside from the Earth's magnetic field on the inside. Because the solar wind moves at supersonic speed, a bow shock must form ahead of the magnetopause that acts to slow the solar wind to subsonic speeds. Magnetopause, bow shock and their environs are rich in exciting processes in collisionless plasmas, such as shock formation, magnetic reconnection, particle acceleration and wave-particle interactions. They are interesting in their own right, as part of Earth's environment, but also because they are prototypes of similar structures and phenomena that are ubiquitous in the universe, having the unique advantage that they are accessible to in situ measurements. The boundaries of the magnetosphere have been the target of direct in-situ measurements since the beginning of the space age. But because they are constantly moving, changing their orientation, and undergoing evolution, the interpretation of single-spacecraft measurements has been plagued by the fundamental inability of a single observer to unambiguously distinguish spatial from temporal changes. The boundaries are thus a prime target for the study by a closely spaced fleet of spacecraft. Thus the Cluster mission, with its four spacecraft in a three-dimensional configuration at variable separation distances, represents a giant step forward. This 20th volume of the ISSI Space Science Series represents the first synthesis of the exciting new results obtained in the first few years of the Cluster mission. TOC:Solar wind, foreshock, magnetosheath.- The near-earth solar wind.-The foreshock.- The Magnetosheath.- The bow shock.- Cluster at the bow shock: Introduction-. QI Shock structure and processes.- QII Shock structure and processes.- Cluster at the bow shock: Status and outlook.- Magnetopause and cusp.- Magnetopause and boundary layer.- Cluster at the magnetospheric cusps.- Magnetopause processes.- Abbreviations and Acronyms.- Author Affiliations and addresses.