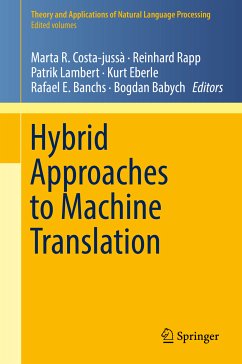 This volume provides an overview of the field of Hybrid Machine Translation (MT) and presents some of the latest research conducted by linguists and practitioners from different multidisciplinary areas. Nowadays, most important developments in MT are achieved by combining data-driven and rule-based techniques. These combinations typically involve hybridization of different traditional paradigms, such as the introduction of linguistic knowledge into statistical approaches to MT, the incorporation of data-driven components into rule-based approaches, or statistical and rule-based pre- and…mehr

Andere Kunden interessierten sich auch für
Produktbeschreibung
This volume provides an overview of the field of Hybrid Machine Translation (MT) and presents some of the latest research conducted by linguists and practitioners from different multidisciplinary areas. Nowadays, most important developments in MT are achieved by combining data-driven and rule-based techniques. These combinations typically involve hybridization of different traditional paradigms, such as the introduction of linguistic knowledge into statistical approaches to MT, the incorporation of data-driven components into rule-based approaches, or statistical and rule-based pre- and post-processing for both types of MT architectures.

The book is of interest primarily to MT specialists, but also - in the wider fields of Computational Linguistics, Machine Learning and Data Mining - to translators and managers of translation companies and departments who are interested in recent developments concerning automated translation tools.

Produktdetails
Autorenporträt
Marta R. Costa-jussà is a MarieCurie fellow at the Universitat Politècnica de Catalunya (UPC, Barcelona). Her research expertise is in machine translation and automatic speech recognition, including both experience in hybrid methodologies and scarce resources. She received her PhD from the UPC in 2008. She has worked at LIMSI-CNRS, Universitat Pompeu Fabra, Barcelona Media Innovation Center, Universidade de São Paulo, Institute for Infocomm Research and Instituto Politécnico Nacional. She has received prestigious and competitive fellowships including a Ramon y Cajal. She has participated in 12 European and National (Spanish, French and Brazilian) projects. She has organized 7 conferences/workshops among which there is the ACL Workshops on "Hybrid Approaches to Translation", done more than 20 invited talks and published over 100 papers in international scientific journals and conferences receiving several awards. She has been cooperating with companies (TaUYou, UniversalDoctor and bmmt) as a consultant. Reinhard Rapp received a PhD in Information Science from the University of Konstanz and is currently a member of faculty and a Marie Curie researcher at the University of Mainz, Department of Translation Studies, Linguistics and Cultural Studies. His research and teaching centers around language technology, with focus on machine translation, computer-assisted translation, comparable corpora, and lexical semantics. He has co-authored and co-edited more than 150 publications, among them 25 books and proceedings. Patrik Lambert received a master's degree in Physics from McGill University. He completed, in 2008, a PhD in Artificial Intelligence at the Universitat Politècnica de Catalunya (UPC). He then worked as post-doctoral researcher at the Center for Next Generation Localisation in Dublin City University. In 2009 he joined the LST group at Le Mans University as post- doctoral researcher. He has taught undergraduate courses in several Universities. His current research interests include word and sentence alignment, adaptive and evolutive Statistical Machine Translation Models, as well as cross-lingual sentiment analysis. The systems he contributed showed excellent performance in public evaluation campaigns such as NIST or the Workshop of Machine Translation. He has published more than 40 papers in international journals and conference proceedings. He has participated in several national and international projects such as TC-STAR, Euromatrix Plus and Gale, working in languages such as Chinese, Arabic and European languages. Kurt Eberle is managing director, co-founder and -owner of Lingenio GmbH, a former spin-off company of IBM research Germany developing and marketing machine translation products and dictionaries. He studied mathematics, romance languages and computational linguistics in Tübingen, Freiburg, Paris and Heidelberg and received his PhD and Habilitation from the Institute for Natural Language Processing (IMS) at the University of Stuttgart. In the 90s he directed a number of semantics- and machine translation-projects at the IMS and was in charge of the development of German-French machine translation at IBM research Germany. Besides this he served as a member of the board of the Journal of Semantics and of other editorial boards and program committees, is associate professor at the University of Heidelberg and published about 60 contributions to topics from discourse semantics, pragmatics, temporal logic and machine translation. Rafael Banchs is currently a Research Scientist at the Institute for Infocomm Research in Singapore. He received his Ph.D. in Electrical Engineering from the University of Texas at Austin in 1998. He was awarded a Ramon y Cajal fellowship from the Spanish Ministry of Education and Science from 2004 to 2009. His recent areas of research include Machine Translation, Information Retrieval, Cross-language Information Retrieval and Dialogue Systems. More specifically, he has been working on the application of vector space models along with linear and non-linear projection techniques to improve the quality of statistical machine translation and cross-language information retrieval systems. He has been author and co-author of more than 80 technical papers, some of which have been published in indexed journals and international conferences, including major conferences such as SIGIR and ACL Bogdan Babych is a lecturer at the Centre for Translation Studies of the University of Leeds. He is teaching modules on principles and applications of the Machine Translation technology and is an author of over 30 publications in the areas of Machine Translation evaluation, using Comparable Corpora for MT, developing new linguistic models for Machine Translation, improving the quality of Machine Translation with different linguistic and information processing techniques, such as Information Extraction. In 2005 he received his PhD in Machine Translation from the University of Leeds and worked on a number of large-scale collaborative projects funded by the UK national research councils and the EU FP7 ICT grants, such as ASSIST, ACCURAT and TTC. He is the coordinator of the FP7 Marie Curie HyghTra project (2010-2014) which specifically addresses the issue of rapid development of hybrid high-quality translation systems.
Inhaltsangabe
Preface.- Foreword.- Chapter 1. Hybrid Machine Translation Overview.- Part 1: Adding Linguistics into SMT.- Chapter 2. Controllent Ascent: Imbuing Statistical MT with Linguistic knowledge.- Chapter 3. Hybrid Word Alignment.- Chapter 4. Syntax in SMT.- Part 2. Using Machine Learning in MT.- Chapter 5. Machine Learning in RBMT.- Chapter 6. Language-Independent Hybrid MT.- Part 3. Hybrid NLP tools useful for MT.- Chapter 7. Use of Dependency Parsers in MT.- Chapter 8. Word Sense Disambiguation in MT.
Kundenbewertungen
Schreiben Sie eine Kundenbewertung zu diesem Produkt und gewinnen Sie mit etwas Glück einen 15,- EUR bücher.de–Gutschein!
Bewertung schreiben Bewertung schreiben
Mehr zum Thema