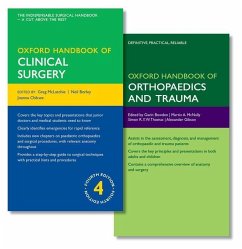 This pack of two books in the Oxford Medical Handbooks series provides an accessible overview of key surgical principles, techniques and procedures and the salient features of a range of trauma and orthopaedic conditions and their treatment.

Andere Kunden interessierten sich auch für
Produktbeschreibung
This pack of two books in the Oxford Medical Handbooks series provides an accessible overview of key surgical principles, techniques and procedures and the salient features of a range of trauma and orthopaedic conditions and their treatment.
Produktdetails
Autorenporträt
Gavin Bowden is a Consultant Orthopaedic and Spinal Surgeon at the Nuffield Orthopaedic Centre NHS Trust and the John Radcliffe Hospital, a position held since 2000. His main clinical interests are spine and hip surgery especially the management of degenerative disorders, deformity and tumours of the spine. His major research interest is the design of implants for minimally invasive spinal surgery and basic science interests include the physiology of the growing spine. He is an Honorary Senior Lecturer at the University of Oxford where he is a Fellow of Worcester College. Gavin graduated in Medicine in 1986 from the University of the Witwatersrand and was awarded the Gencor Prize. He then specialised in Orthopaedic Surgery in Cape Town. In 1995 he was awarded the Synthes Prize by the University of Cape Town and the Edelstein Medal (awarded to the outstanding candidate in the Orthopaedic Fellowship Examination) by the College of Surgeons of South Africa. Martin McNally is a full time consultant specialising in limb reconstruction. He leads a specialist team, which runs the only dedicated Bone Infection Unit in the UK. He has a special interest in limb injury, particularly non-union and malunion fractures. Martin's training in trauma and orthopaedics was principally in Northern Ireland. Since 1993, he has developed specialist skills in the treatment of complex injuries, particularly infected fractures and fractures with bone loss. He holds the Martin Medal for Orthopaedic Research, The Sir Walter Mercer Gold Medal from the Intercollegiate Board of the Royal College of Surgeons and the International Society for Fracture Repair Young Investigator Award. Martin has a strong interest and record in teaching and research. He holds the Degree of Doctor of Medicine and is Honorary Senior Clinical Lecturer in Orthopaedic Surgery at Oxford University. He is Head of Surgery at the Nuffield Orthopaedic Centre. Simon Thomas is a Consultant Paediatric Orthopaedic Surgeon at the Bristol Royal Children's Hospital and Honorary Consultant at the Royal United Hospital, Bath, positions he has held since late 2007. His main clinical interests are developmental hip dysplasia, limb deformity and sports injuries in children. His major research interest is the use of systemic and intraosseus bisphosphonate for avascular necrosis of the femoral head in children and adolescents. He graduated in Medicine in 1992 from the University of the Cambridge and did clinical training at Barts, qualifying in 1995. He specialised in Orthopaedic Surgery in Oxford (2000-2005). In 2005/6 he undertook 12 months advanced clinical training at the Hospital for Sick Children, Toronto. He has undertaken further fellowship training in Oxford (limb reconstruction) and Perth, Australia (adolescent sports medicine). Alex Gibson was educated in Canterbury, then studied medicine at Charing Cross & Westminster Medical School in London, qualifying MB BS in 1996. After pre-registration jobs, his basic surgical training was on the St. Mary's rotation and orthopaedic specialist training in Oxford. He has also had periods of advanced fellowship training in Spinal surgery in Oxford, Auckland and Brisbane. He was appointed Consultant Spinal Surgeon at the Royal National Orthopaedic Hospital, Stanmore in 2009. Greg McLatchie is a Consultant Surgeon in Hartlepool NHS Trust, and professor of sports medicine at the University of Sunderland. He has previously been the director of the National Sports Medicine Institute. Neil Borley trained at Guy's Hospital Medical School, Cambridge, Canterbury and Oxford. He is a Consultant Colorectal Surgeon with an interest in the education and training of undergraduate and postgraduate students of basic sciences and surgery. He is also an examiner in surgery. Joanna Chikwe is the inaugral Chairman of the newly established Department of Cardiovascular Surgery at Mount Sinai St. Luke's. She is Professor of Cardiovascular Surgery at Ichan School of Medicine at Mount Sinai and serves as Program Director of the Thoracic Surgery Residents and Advanced Fellowship Programs for the Mount Sinai Health System. She specialises in minimally invasive cardiac surgery techniques.
Kundenbewertungen
Schreiben Sie eine Kundenbewertung zu diesem Produkt und gewinnen Sie mit etwas Glück einen 15,- EUR bücher.de–Gutschein!
Bewertung schreiben Bewertung schreiben