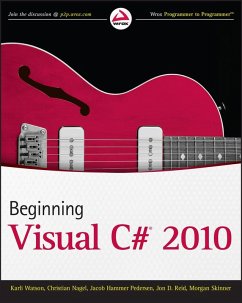 Update to Wrox's leading C# book for beginners Get ready for the next release of Microsoft's C# programming language with this essential Wrox beginner's guide. Beginning Microsoft Visual C# 2010 starts with the basics and brings you thoroughly up to speed. You'll first cover the fundamentals such as variables, flow control, and object-oriented programming and gradually build your skills for Web and Windows programming, Windows forms, and data access. Step-by-step directions walk you through processes and invite you to &quote;Try it Out,&quote; at every stage. By the end, you'll be able to…mehr

Andere Kunden interessierten sich auch für
Produktbeschreibung
Update to Wrox's leading C# book for beginners Get ready for the next release of Microsoft's C# programming language with this essential Wrox beginner's guide. Beginning Microsoft Visual C# 2010 starts with the basics and brings you thoroughly up to speed. You'll first cover the fundamentals such as variables, flow control, and object-oriented programming and gradually build your skills for Web and Windows programming, Windows forms, and data access. Step-by-step directions walk you through processes and invite you to &quoteTry it Out,&quote at every stage. By the end, you'll be able to write useful programming code following the steps you've learned in this thorough, practical book. The C# 4 programming language version will be synonymous with writing code with in C# 2010 in Visual Studio 2010, and you can use it to write Windows applications, Web apps with ASP.NET, and Windows Mobile and Embedded CE apps Provides step-by-step instructions for mastering topics such as variables, flow controls, and object-oriented programming before moving to Web and Windows programming and data access Addresses expressions, functions, debugging, error handling, classes, collections, comparisons, conversions, and more If you've always wanted to master Visual C# programming, this book is the perfect one-stop resource. Note: CD-ROM/DVD and other supplementary materials are not included as part of eBook file.

Produktdetails
Autorenporträt
KARLI WATSON is consultant at Infusion Development(www.infusion.com), a technology architect at Boost.net(www.boost.net), and a freelance IT specialist, author, anddeveloper. For the most part, he immerses himself in .NET (inparticular C# and lately WPF) and has written numerous books in thefield for several publishers. He specializes in communicatingcomplex ideas in a way that is accessible to anyone with a passionto learn, and spends much of his time playing with new technologyto find new things to teach people about. During those (seeminglyfew) times where he isn't doing the above, Karli willprobably be wishing he was hurtling down a mountain on a snowboard.Or possibly trying to get his novel published. Either way,you'll know him by his brightly colored clothes. You can alsofind him tweeting online at www.twitter.com/karlequin, and maybeone day he'll get around to making himself a website. Karliauthored chapters 1 through 14, 21, 25 and 26. CHRISTIAN NAGEL is a Microsoft Regional Director andMicrosoft MVP, an associate of Thinktecture, and owner of CNInnovation. He is a software architect and developer who offerstraining and consulting on how to developMicrosoft .NET solutions.He looks back on more than 25 years of software developmentexperience. Christian started his computing career with PDP 11 andVAX/VMS systems, covering a variety of languages and platforms.Since 2000, when .NET was just a technology preview, he has beenworking with various .NET technologies to build numerous .NETsolutions. With his profound knowledge of Microsoft technologies,he has written numerous .NET books, and is certified as a MicrosoftCertified Trainer and Professional Developer. Christian speaks atinternational conferences such as TechEd and Tech Days, and startedINETA Europe to support .NET user groups. You can contact Christianvia his web sites, www.cninnovation.com and www.thinktecture.comand follow his tweets on www.twitter.com/christiannagel. Christianwrote chapters 17 through 20. JACOB HAMMER PEDERSEN is a Senior Application Developerat Elbek& Vejrup. He just about started programming when he wasable to spell the word 'BASIC', which, incidentally isthe first programming language he ever used. He started programmingthe PC in the early '90s, using Pascal but soon changed hisfocus to C++, which still holds his interest. In the mid '90shis focus changed again, this time to Visual Basic. In the summerof 2000 he discovered C# and has been happily exploring it eversince. Primarily working on the Microsoft platforms, his otherexpertise includes MS Office development, SQL Server, COM andVisual Basic.Net. A Danish citizen, Jacob works and lives in Aarhus, Denmark. Heauthored chapters 15, 16, and 22. JON D. REID is a software engineering manager atMetrixLLC, an ISV of field service management software for the Microsoftenvironment. He has co-authored a variety .NET books, includingBeginning Visual C# 2008, Beginning C# Databases:From Novice to Professional, Pro Visual Studio .NET, and manyothers. Jon wrote chapters 23 and 24. MORGAN SKINNER began his computing career at a youngage on the Sinclair ZX80 at school, where he was underwhelmed bysome code a teacher had written and so began programming inassembly language. Since then he's used all sorts oflanguages and platforms, including VAX Macro Assembler, Pascal,Modula2, Smalltalk, X86 assembly language, PowerBuilder, C/C++, VB,and currently C# (of course). He's been programming in .NETsince the PDC release in 2000, and liked it so much he joinedMicrosoft in 2001. He now works in premier support for developersand spends most of his time assisting customers with C#. Morganwrapped up the book by authoring chapter 27. You can reach Morganat www.morganskinner.com.
Inhaltsangabe
INTRODUCTION.