Living in the aftermath of the Columbine tragedy 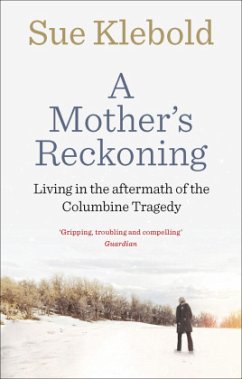 Living in the aftermath of the Columbine tragedy

Paperback edition of the memoir from the mother of Dylan Klebold, who, with his friend Eric Harris, committed the Columbine High School massacre in 1999. Powerful and haunting, it sheds light on this terrible terrible mass murder. All profits from the book will be donated to organisations focusing on mental health issues.…mehr

Andere Kunden interessierten sich auch für
Produktbeschreibung
Paperback edition of the memoir from the mother of Dylan Klebold, who, with his friend Eric Harris, committed the Columbine High School massacre in 1999. Powerful and haunting, it sheds light on this terrible terrible mass murder. All profits from the book will be donated to organisations focusing on mental health issues.
Produktdetails
Autorenporträt
Sue Klebold is the mother of Dylan Klebold, one of the two shooters at Columbine High School in 1999 who killed 13 people before ending their own lives, a tragedy that saddened and galvanized the nation. She has spent the last 15 years excavating every detail of her family life, and trying to understand the crucial intersection between mental health problems and violence. Instead of becoming paralyzed by her grief and remorse, she has become a passionate and effective agent working tirelessly to advance mental health awareness and intervention.
Rezensionen
[U]nimaginably detailed, raw, minute-by-minute, illuminating, and just plain gripping. It's also the most extraordinary testament--to honesty, love, pain, doubt, and resilience. This book is nothing less than a public service. I beseech you to read it.
Bruce Feiller

As people read Sue s memoir, what they will find is that her book is honest, and her pain genuine.  Her story may be uncomfortable to read, but it will raise awareness about brain health and the importance of early identification and intervention to maintain it.  If people listen to her to all that she has experienced, and to how this has changed her they will be quicker to respond to depression in young people, to the suicidal thinking that can accompany it, and to the rage that can build almost unnoticed in young people when the people who truly and completely love and care for them are distracted by other challenges in life.
Paul Gionfriddo, President and CEO of Mental Health America

Required reading for all parents of adolescents...soul-piercingly honest, written with bravery and intelligence... A book of nobility and importance. The Times

Reading this book as a critic is hard; reading it as a parent is devastating .I imagine snippets of my own young children in Dylan Klebold, shades of my parenting in Sue and Tom.  I suspect that many families will find their own parallels .This book s insights are painful and necessary and its contradictions inevitable.
Carlos Lozada, The Washington Post

[Sue Klebold s book] reads as if she had written it under oath, while trying to answer, honestly and completely, an urgent question: What could a parent have done to prevent this tragedy?
She earns our pity, our empathy and, often, our admiration; and yet the book s ultimate purpose is to serve as a cautionary tale, not an exoneration.
The New York Times Book Review

I believe Sue Klebold.  So will you.
LA Times

At times her story is so chilling you want to turn away, but Klebold s compassion and honesty and realization that parents and institutions must work to discover kids hidden suffering-will keep you riveted.
People.com

This book which can be tough to read in places is an important one. It helps us arrive at a new understanding of how Columbine happened and, in the process, may help avert other tragedies. Rated: A.
Entertainment Weekly…mehr
Kundenbewertungen
Schreiben Sie eine Kundenbewertung zu diesem Produkt und gewinnen Sie mit etwas Glück einen 15,- EUR bücher.de–Gutschein!
Bewertung schreiben Bewertung schreiben
Mehr zum Thema