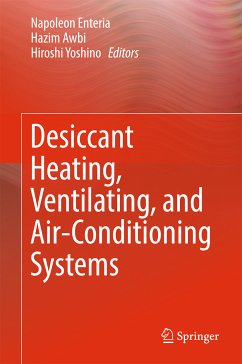 This book presents the necessary fundamental knowledge in the research, development, design, selection, and application of desiccant heating, ventilating, and air-conditioning systems. It covers the established installations in different climatic conditions and building types. In addition, advanced performance evaluation techniques are presented, covering thermodynamic, economic, and environmental aspects. Hence, the book is an important resource for undergraduate and graduate students, design and installation engineers, researchers and scientists, building owners and occupants, and energy and environmental policy makers. …mehr

Produktdetails
Autorenporträt
Napoleon Enteria is a research specialist of the Building Research Institute, Japan; a visiting researcher at Tohoku University, Japan; and a founder and managing consultant of the Enteria Grün Energietechnik, Philippines. He was a scientist at the Solar Energy Research Institute of Singapore of the National University of Singapore and a global center of excellence researcher at the Wind Engineering Research Center of the Tokyo Polytechnic University, Japan. His research activities in renewable energy systems, HVAC systems, and building sciences produced several international scientific and engineering papers in books, review journals, research journals, and conference proceedings. He has submitted and presented dozens of technical reports for collaborative projects with research institutes, universities, and companies in several countries and is regularly invited as reviewer for international journals in the field of energy systems, air-handling systems, and building performances. On occasion, he receives invitations to review research funding applications and gives technical and scientific comments on international scientific and engineering activities. He is a Member of the American Society of Mechanical Engineers (ASME), the American Society of Heating, Refrigerating and Air-Conditioning Engineers (ASHRAE) and, the International Solar Energy Society (ISES).

Hazim Awbi is professor emeritus of the University of Reading, United Kingdom, where he was a professor of Building Environmental Science, director of the Technologies of Sustainable Built Environments Centre, and director of the Indoor Environment and Energy Research Group. His research interests are in room air-flow analysis and modeling, computational fluid dynamics, indoor air quality, air distribution systems, low-energy building environmental control systems, heat transfer, and energy storage. He is the author of Ventilation of Buildings (Taylor and Francis), editor of Ventilation Systems-Design and Performance (Taylor & Francis), editor of the CIBSE Application Manual 11: Building Performance Modelling, and co-author of another four books. He has published more than 160 articles in journals and conference proceedings. Professor Awbi is chairman of the Building Simulation Group of the Chartered Institution of Building Services Engineers, London.

Hiroshi Yoshino is professor emeritus of Tohoku University, Japan, where he is currently a president-appointed extraordinary professor. He was the president of the Architectural Institute of Japan (AIJ) from 2013 to 2015. He has been involved in research subjects for building science such as indoor environment and energy conservation, ventilation and indoor air quality, occupants' health and indoor environment, and passive solar system performance. Professor Yoshino is one of the contributors to the reports of the Intergovernmental Panel on Climate Change (IPCC), which was awarded the Nobel Peace Prize in 2007. He is the operating agent at the International Energy Agency's Energy in Buildings and Communities Programme, responsible to the Annex 53 Total Energy Use in Buildings. He is visiting professor at several universities and professional institutions of international repute and is the author of some 30 book chapters, with more than 200 publications including articles in academic journals and conference proceedings. He has also served as chairman and director of several scholarly societies, conferences, and committees, as well as an editorial board member of international journals. Professor Yoshino has received a number of awards, including those from the AIJ in the area of journal papers in 1992 and the Society of Heating, Air-Conditioning and Sanitary Engineers of Japan (SHASE) Best Papers in 1975, 1992, 1997, 2000, and 2005. He received the Japanese Uichi Inoue Memorial Award from SHASE in 2013, and he is an ASHRAE Fellow.
Kundenbewertungen
Schreiben Sie eine Kundenbewertung zu diesem Produkt und gewinnen Sie mit etwas Glück einen 15,- EUR bücher.de–Gutschein!
Bewertung schreiben Bewertung schreiben
Mehr zum Thema
Mehr aus der Kategorie eBook > Fachbücher > Technische Wissenschaften > Ingenieurwesen > Übergreifende Grundlagen > Physik