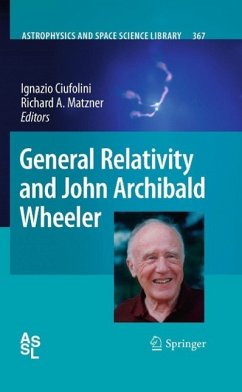 Observational and experimental data pertaining to gravity and cosmology are changing our view of the Universe. General relativity is a fundamental key for the understanding of these observations and its theory is undergoing a continuing enhancement of its intersection with observational and experimental data. These data include direct observations and experiments carried out in our solar system, among which there are direct gravitational wave astronomy, frame dragging and tests of gravitational theories from solar system and spacecraft observations.
This book explores John Archibald…mehr

Andere Kunden interessierten sich auch für
Produktbeschreibung
Observational and experimental data pertaining to gravity and cosmology are changing our view of the Universe. General relativity is a fundamental key for the understanding of these observations and its theory is undergoing a continuing enhancement of its intersection with observational and experimental data. These data include direct observations and experiments carried out in our solar system, among which there are direct gravitational wave astronomy, frame dragging and tests of gravitational theories from solar system and spacecraft observations.

This book explores John Archibald Wheeler's seminal and enduring contributions in relativistic astrophysics and includes: the General Theory of Relativity and Wheeler's influence; recent developments in the confrontation of relativity with experiments; the theory describing gravitational radiation, and its detection in Earth-based and space-based interferometer detectors as well as in Earth-based bar detectors; the mathematical description of the initial value problem in relativity and applications to modeling gravitational wave sources via computational relativity; the phenomenon of frame dragging and its measurement by satellite observations. All of these areas were of direct interest to Professor John A. Wheeler and were seminally influenced by his ideas.

Produktdetails
Autorenporträt
Richard Matzner earned his Ph.D. in 1967 from The University of Maryland. He has been involved since then in questions of cosmology, of gravitational radiation, and of black hole physics. He has been Director of The Center for Relativity at The University of Texas at Austin since 1987. In 1993 he organized and became the Lead Principal Investigator of a NSF/ARPA funded eight-university Computational Grand Challenge program describing the interaction of black holes, which are potential sources for observable gravitational radiation. Matzner has served on a number of advisory committees to the Air Force, the National Science Foundation, the European Space Agency, and The Department of Energy. He is currently a member of High Performance Computing advisory and allocation committees, on campus, and nationally. In 1996-97 he was on research assignment at Los Alamos National Laboratory, in the Institute for Geophysics and Planetary Physics, where he began work on the Dictionary of Geophysics, Astrophysics, and Astronomy, to be published by CRC Press. Ignazio Ciufolini worked with John Archibald Wheeler on the book "Gravitation and Inertia" recipient of the US "American Association of Publishers" Award for the best 1995 professional and scholar book in physics and astronomy. In 2001, he was awarded the International Tomassoni-Chisesi prize for physics by Sapienza University. Ciufolini, from the University of Salento, and Erricos Pavlis from the University of Maryland BC, analysed the orbits of the satellites LAGEOS and LAGEOS 2 and, in 2004, published in Nature the measurement, with an uncertainty of about 10 %, of the frame-dragging effect, predicted by Einstein's General Relativity. Commenting on this 2004 research, Neil Ashby of the University of Colorado, said the result was "the first reasonably accurate measurement of frame dragging." The reaction to this latest measurement has been broadly positive and, on 6th September 2007, Nature dedicated its cover to Ciufolini's research. He is currently the Principal Investigator of the LARES satellite to be launched in 2011 to test Einstein's theory.
Inhaltsangabe
John Archibald Wheeler and General Relativity.- to General Relativity and John Archibald Wheeler.- John Wheeler and the Recertification of General Relativity as True Physics.- John Archibald Wheeler: A Few Highlights of His Contributions to Physics.- Wheeler Wormholes and the Modern Astrophysics.- Foundations and Tests of General Relativity.- Unified Form of the Initial Value Conditions.- The Confrontation Between General Relativity and Experiment.- Measurements of Space Curvature by Solar Mass.- Modern Cosmology: Early and Late Universe.- Gravitational Waves.- to Gravitational Waves.- Discovering Relic Gravitational Waves in Cosmic Microwave Background Radiation.- Status of Gravitational Wave Detection.- Search for Gravitational Waves with Resonant Detectors.- Gravitational Fields with 2-Dimensional Killing Leaves and the Gravitational Interaction of Light.- Frame Dragging and Gravitomagnetism.- Rotation and Spin in Physics.- The Gravitomagnetic Influence on Earth-Orbiting Spacecrafts and on the Lunar Orbit.- Quasi-inertial Coordinates.- Gravitomagnetism and Its Measurement with Laser Ranging to the LAGEOS Satellites and GRACE Earth Gravity Models.- The Relativity Mission Gravity Probe B, Testing Einstein's Universe.- The LARES Space Experiment: LARES Orbit, Error Analysis and Satellite Structure.- The History of the So-Called Lense-Thirring Effect, and of Related Effects.- Miscellaneous.- Atom Interferometers and Optical Clocks: New Quantum Sensors Based on Ultracold Atoms for Gravitational Tests in Earth Laboratories and in Space.- The York Map and the Role of Non-inertial Frames in the Geometrical View of the Gravitational Field.- Erratum.
Kundenbewertungen
Schreiben Sie eine Kundenbewertung zu diesem Produkt und gewinnen Sie mit etwas Glück einen 15,- EUR bücher.de–Gutschein!
Bewertung schreiben Bewertung schreiben
Mehr zum Thema