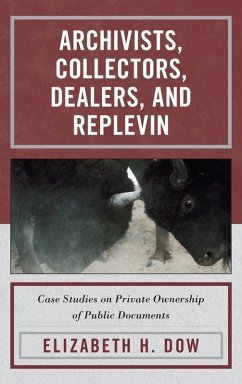 Andere Kunden interessierten sich auch für
Produktbeschreibung
Today, government archivists and manuscript collectors are often in conflict over government-created documents that come up for sale out of private hands. Such manuscripts are often archival material that escaped government control, and government archivists want that missing material back to complete the historic record. Collectors and dealers, however, assert that since the government didn't take care of their documents properly at the time of their creation, they lost the right to claim them now. This divide between government archivists and collectors has become especially acute for "trophy" documents written by a person of note or about a well-known person or event. Archivists, Collectors, Dealers, and Replevin does not serve as a legal guide to the issues that arise in this divide; instead, it presents both sides of the conflict and examines them dispassionately. The book begins with an historical review of institutional and state-sponsored collecting and the care of historical documents in the United States. The review is followed by a selection of tales of theft and neglect in the past. The third chapter examines the origins and maturation of the archival profession in the United States, and the next discusses the phenomenon of collecting, both as a hobby and as an institutional activity. The fifth chapter provides a general summary of state and federal statutes on public documents in private hands, and with that background in place, the sixth chapter distills the perspectives of the various parties in the struggle. The seventh presents a series of case studies developed to evoke the complexity of these conflicts. The book concludes with steps that holders of public documents can take to avoid conflicts, as well as steps an archive can take to protect its collection.