Life in the Universe 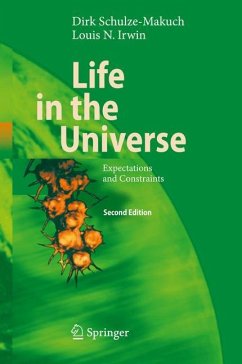 Life in the Universe

Energy, chemistry, solvents, and habitats - the basic elements of living systems - define the opportunities and limitations for life on other worlds. This class-tested text examines each of these parameters in crucial depth and makes the argument that life forms we would recognize may be more common in our solar system than many assume. It also considers, however, exotic forms of life that would not have to rely on carbon as basic chemical element, solar energy as a main energy source, or water as primary solvent. Finally the question of detecting bio- and geosignature of such life forms is…mehr

Andere Kunden interessierten sich auch für
Produktbeschreibung
Energy, chemistry, solvents, and habitats - the basic elements of living systems - define the opportunities and limitations for life on other worlds. This class-tested text examines each of these parameters in crucial depth and makes the argument that life forms we would recognize may be more common in our solar system than many assume. It also considers, however, exotic forms of life that would not have to rely on carbon as basic chemical element, solar energy as a main energy source, or water as primary solvent. Finally the question of detecting bio- and geosignature of such life forms is discussed, ranging from Earth environments to deep space. While speculative considerations in this emerging field of science cannot be avoided, the authors have tried to present their study with the breadth and seriousness that a scientific approach to this issue requires. They seek an operational definition of life and investigate the realm of possibilities that nature offers to realize this very special state of matter and avoid scientific jargon wherever possible to make this intrinsically interdisciplinary subject understandable to a broad range of readers. The second edition thoroughly updates this text in view of the rapid progress in the field and a substantial amount of new material has been added, in particular sections and chapters on adaptation to extreme environments, the future and fate of living systems, life detection concepts based on the thorough analysis of the Viking missions and the issue around the meteorite ALH 84001, and - last but not least - recommendations for the optimization of future space exploration missions. From the reviews of the first edition: "[...] I know of no other book that reassesses the fundamentals of astrobiology in such way. This book is a tacit lesson in open-mindedness tempered with thorough scientific analysis. This is a very important book for all professional astrobiologists." A Ellery, International Journal of Astrobiology, 6 (2007) 182-183
Produktdetails
Inhaltsangabe
Definition of Life.- Origin of Life.- Lessons from the History of Life on Earth.- Energy Sources and Life.- Building Blocks of Life.- Life and the Need for a Solvent.- Habitats of Life.- Ideas of Exotic Forms of Life.- The Future and Fate of Living Systems.- Signatures of Life.- Life Detection-Past and Present.- Optimizing Space Exploration.
Rezensionen
From the reviews: "I would be happy to use this as a text when teaching undergraduate level astrobiology and would certainly recommend it as a good introduction for postgraduates." (Monica M. Grady Meteoritics and Planetary Science 2005, vol. 40, page 507-508) "This book is [...] an in-depth, critical look at the chemical and physical requirements of known living; it also considers the possibilities of some highly speculative environments and living systems. The writing is excellent and, despite the technical nature of the subject, should be understandable for those with minimal exposure to math, physics, chemistry, and astronomy." (P. R. Douville, Choice May 2005, vol. 42, page 459) "This book provides an articulate overview of Astrobiology in the Springer Advances in Astrobiology and Biogeophysics series. It contains an introduction chapter that is essentially a summary of the book, a chapter outlining definitions used, then seven more chapters describing the history of life, known energy sources for life, types of building blocks, potential solvents, known and possible habitats, examples of exotic life forms, and signatures of life. This is an excellent Astrobiology primer and I highly recommend this as a good reference for all scientists in the field of Astrobiology." (Janice Bishop, Icarus 178 (2005), page 289-290) "'In searching for life beyond Earth, we would be well advised to except the unusual'. Here in a nutshell ... is the central theme of this timely and interesting book. ... This is an open-minded and engaging book. ... it is written in an engaging style. ... Astrobiology is a growing field, but any enthusiast will want this sensibly priced volume to hand." (Simon Conway Morris, Geological Magazine, Vol. 144 (3), 2007) From the reviews of the second edition: "Life in the Universe examines exactly why alien life is expected to be most probably carbon-based with water as the biosolvent, but also discusses other proposed alternatives in non-terrestrial-like environments ... . an essential reference book for any astrobiologist's bookshelf, and unique in several important respects. For the sections on biochemical alternatives and energy-generation alone, virtually ignored in other books, I would heartily recommend Life in the Universe and have already referred back to it a number of times myself." (Lewis Dartnell, The Astrology Society of Britain, February, 2009) "The goal of the authors is ... to construct a likely scenario for the origin of life on Earth, to project onto other worlds this scenario, and then to identify the signatures of life that should be the targets of any space exploration that seeks to find life other than on the Earth. ... list of references will be useful to students. In conclusion, if you are curious to know how we got here, where we are going ... this book is for you." (Fernande Grandjean and Gary J. Long, Belgian Physical Society Magazine, Issue 1, 2010)…mehr
"This book does a comprehensive job of touching on the many disparate topics that constitute the discipline. ... a useful book, which provides a starting point for those readers wishing to explore the primary literature in astrobiology. Summing Up: Recommended. Advanced undergraduates through faculty and professionals." (P. K. Strother, Choice, Vol. 56 (11), July, 2019)
Kundenbewertungen
Schreiben Sie eine Kundenbewertung zu diesem Produkt und gewinnen Sie mit etwas Glück einen 15,- EUR bücher.de–Gutschein!
Bewertung schreiben Bewertung schreiben
Mehr zum Thema
Mehr aus der Kategorie Fachbücher > Naturwissenschaften > Biologie > Biochemie