A Critique of Representationalism 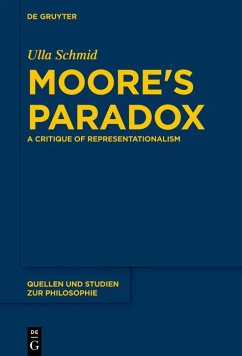 A Critique of Representationalism

Andere Kunden interessierten sich auch für
Produktbeschreibung
Representationalism grasps the meaning and grammar of linguistic expressions in terms of reference; that is, as determined by the respective objects, concepts or states of affairs they are supposed to represent, and by the internal structure of the content they articulate. As a consequence, the semantic and grammatical properties of linguistic expressions allegedly reflect the constitution of the objects they refer to. Questions concerning the meaning of particular linguistic expressions are supposed to be answerable by investigating the metaphysics of the corresponding phenomena. Accordingly, questions of the meaning of psychological concepts, are turned into questions of the nature of psychological states. Concerned with Moore's Paradox, representationalist approaches lead into an investigation of the state of affairs supposedly described by Moore-paradoxical assertions, and thus eventually into investigations concerning the metaphysics of belief.This book argues that this strategy necessarily yields both a wrong solution to Moore's Paradox and an inadequate conception of the meaning of the expression I believe. Turning to the metaphysics of belief is of no use when it comes to understanding either the meaning of the expression 'I believe' or the logic of avowals of belief. Instead, it proposes to focus on the role they play in language, the ways in which they are used in practice.